I spent the morning re-doing some electrical drawings for John. I can honestly say that electrical were not favourite when I worked at the MMBW. Give me mechanical any day, even though I spent the last 5 years in the Geology section.
After lunch we called into work for photocopies to be made for additions.
Stopped in Williamstown for a coffee and the wild winds were blowing against the car. 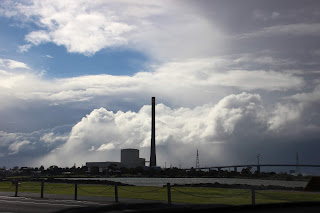 Wild weather towards the airport. 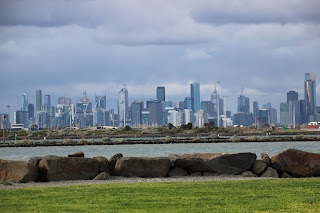 These fishermen were either game or silly to be out on the point.
If they were blown into the water, at least you would be able to see them in their fluro jackets!!
Posted by jacaranda at 4:54 PM