No 2 in the Gondwana 16" x 12" Challenge, due August.
After leaving school I worked at the MMBW as a tracer/drafter and was transferred to the Geology department at Burke Rd, Gardiner. We worked on the plans for the Thomson River Dam being built in Gippsland. Every week, our Geophysicist, Rob and the Geologists, would go out on site and collect rods of core samples from the ground. I then drew the samples on the plans. 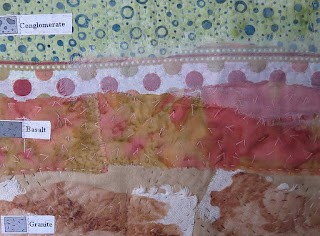 Paper, linen, tea bags, chiffon and fabric to represent the samples of rock and earth. 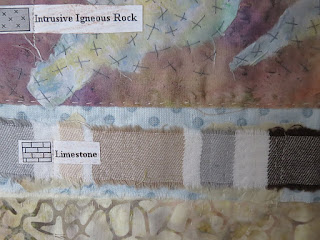 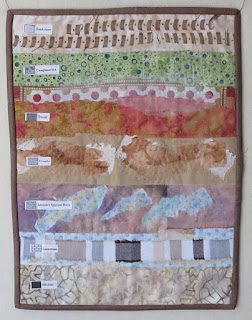 "Core Sample"
After the lands were split, as time went on, civilization became abundant with the building of cities etc. Samples were taken from the ground to see what lay beneath.
These rods were approx 100 - 200m in length and each piece of soil, rock etc were identified.