Melbourne Craft and and Quilt Show

Went along to the show yesterday and spent the day catching up with friends, a 2 hour stint of white glove duty, knitting Poppies and cruising the stalls. 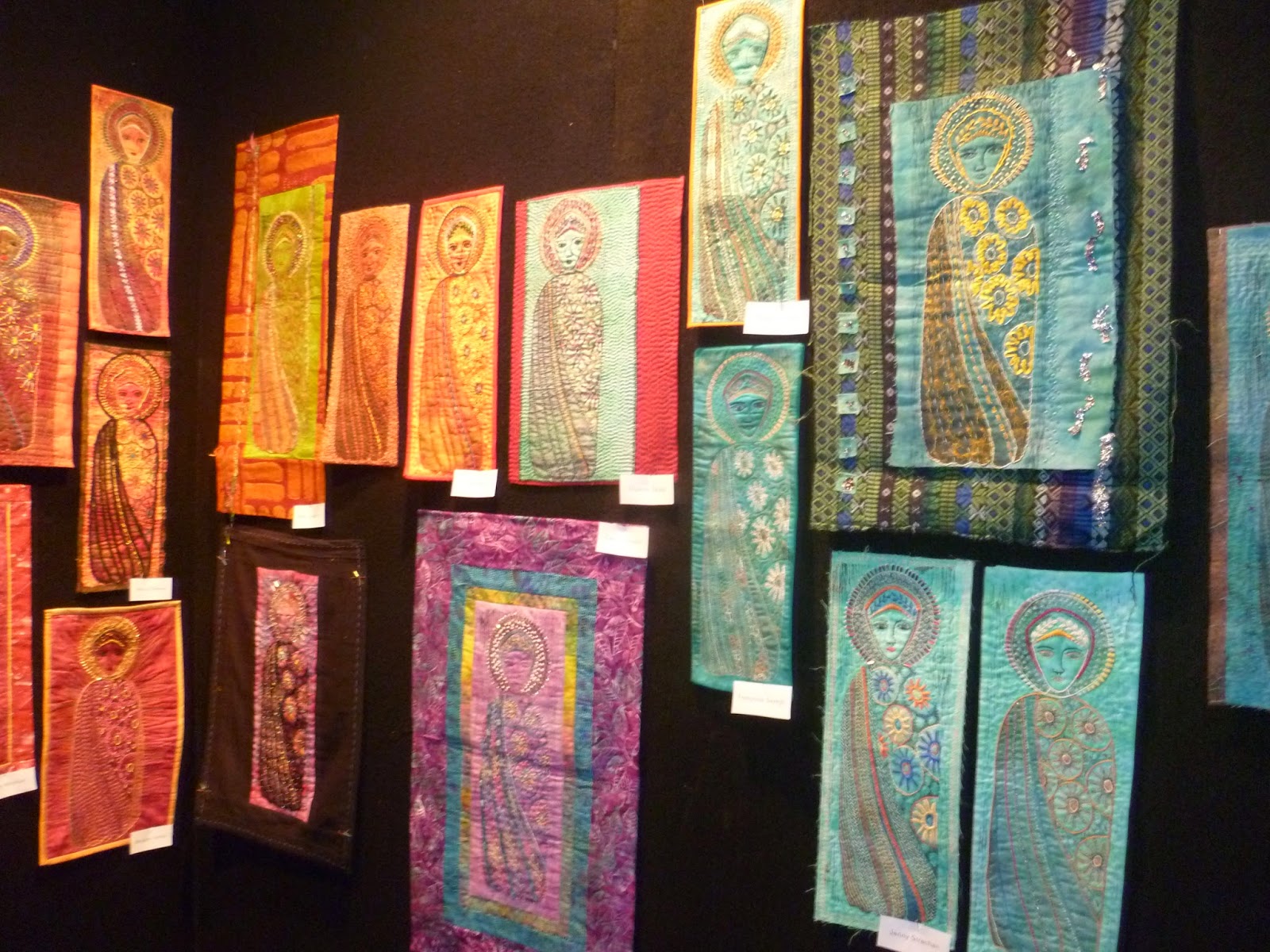 *
The Sentinels were on display.
(* my Sentinel) 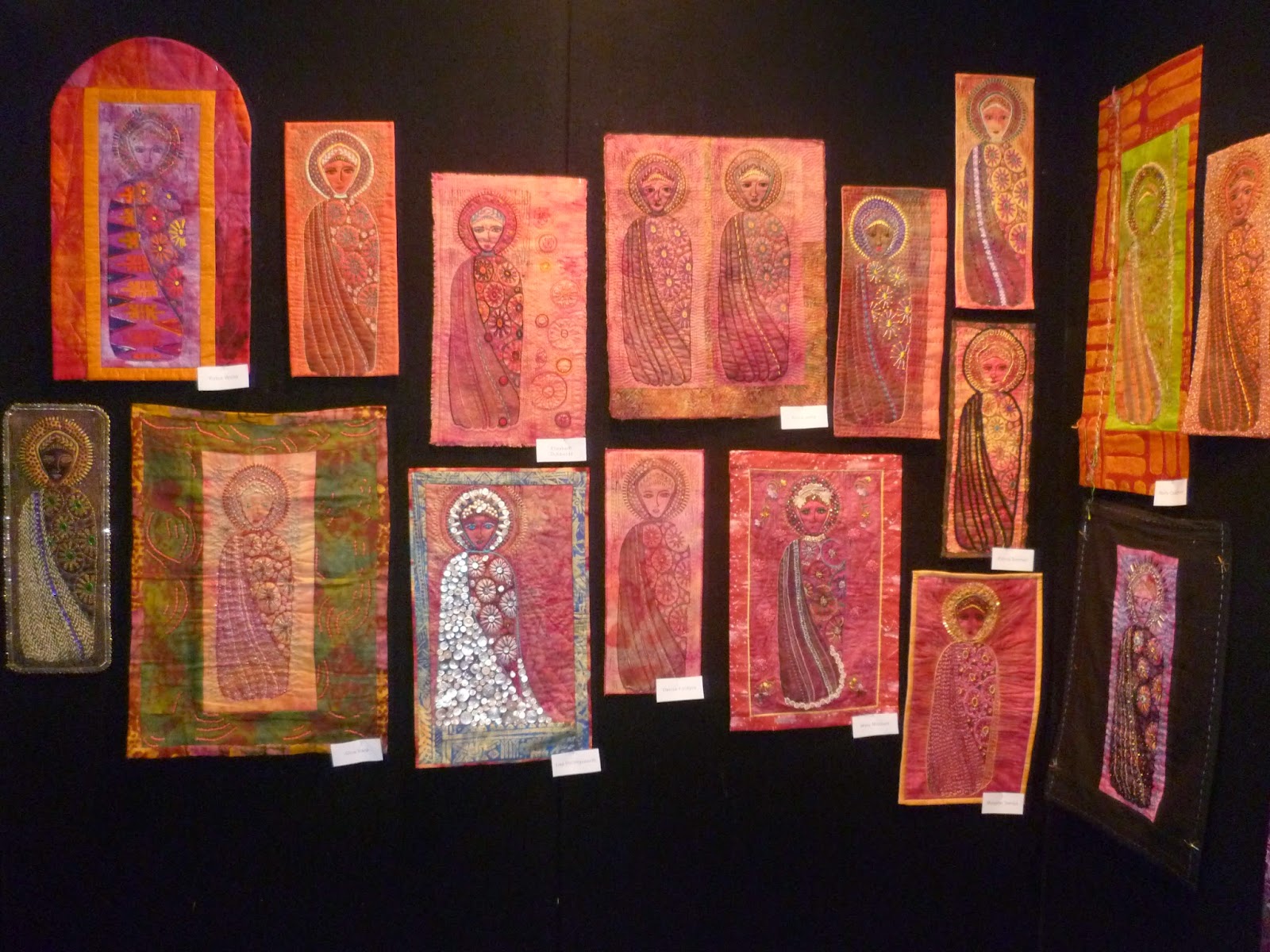 It was interesting how everyone interpreted the stitching and the embellishments used. 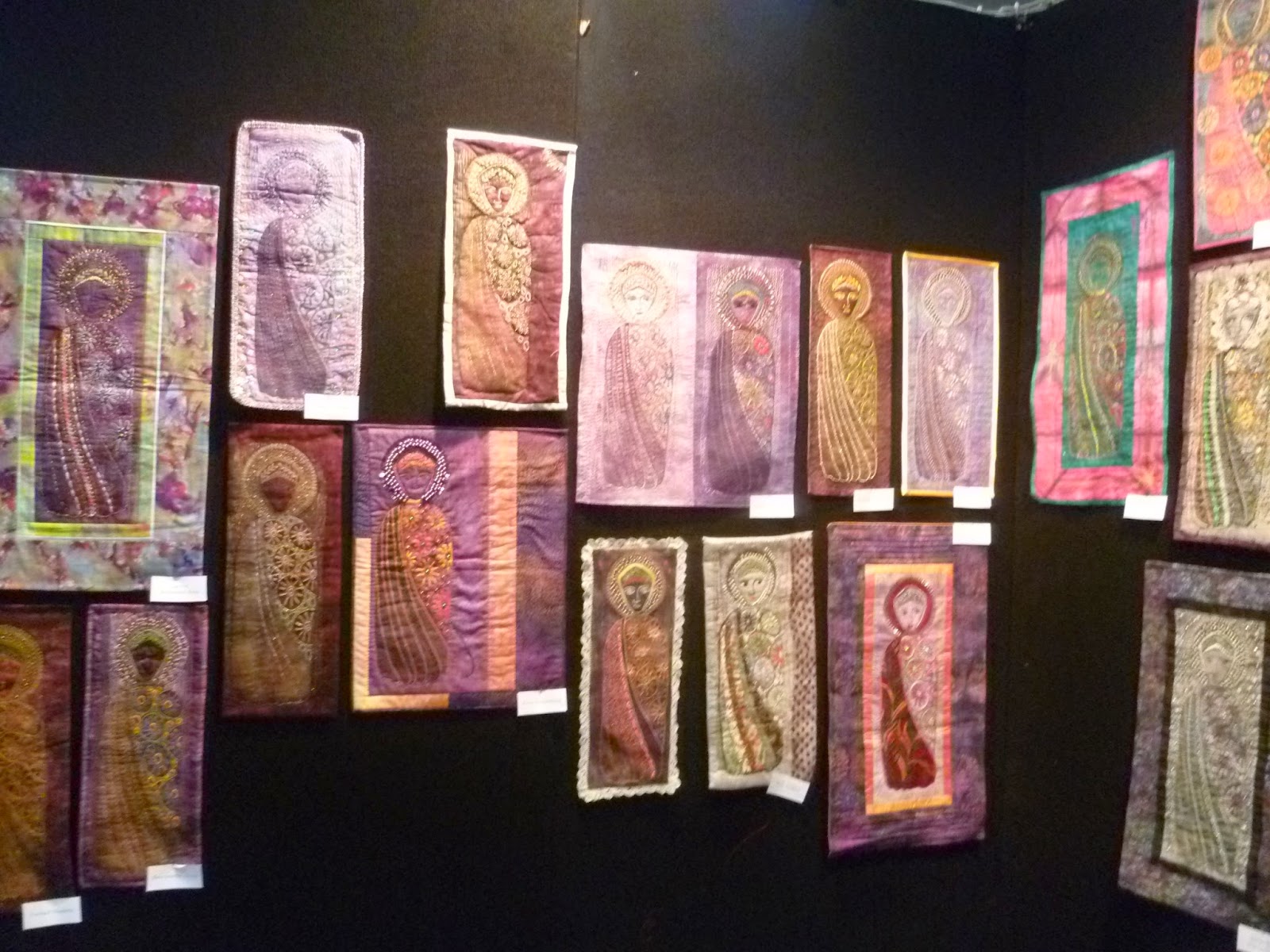 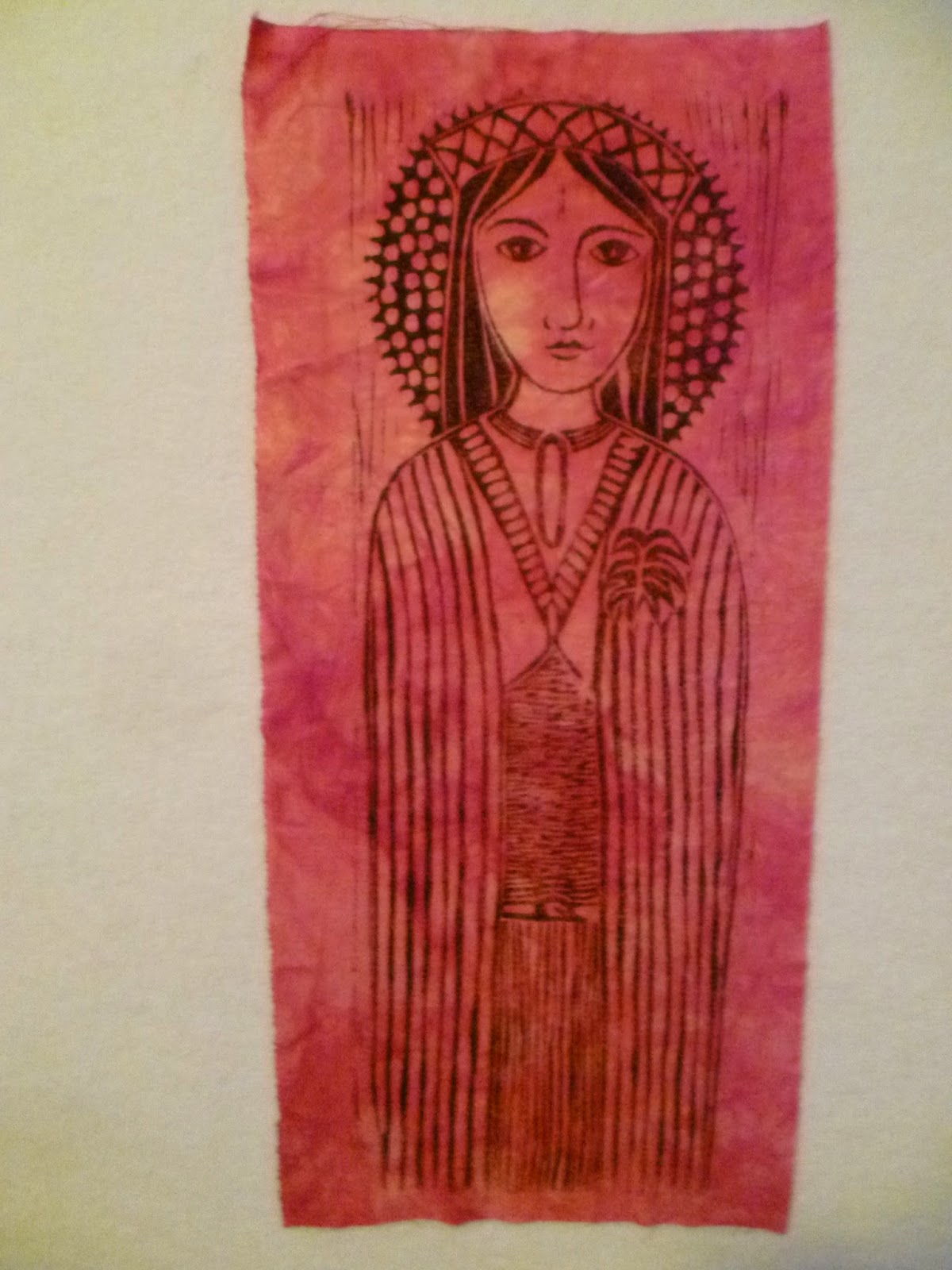 Dijanne has another to be stitched for another exhibition. I bought one, the opposite colour to the one I had previously finished. 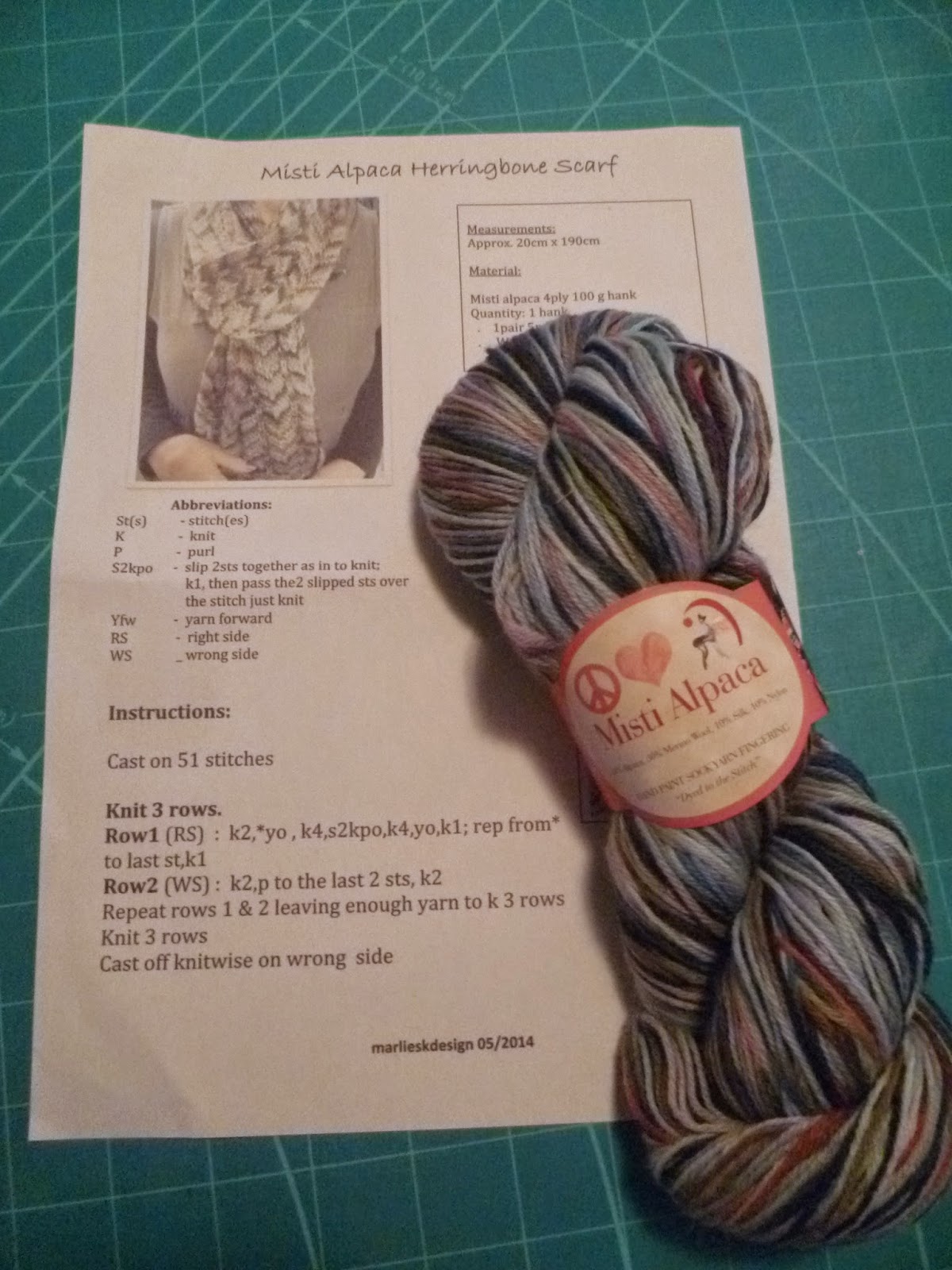 One of my 2 purchases, Misti Alpaca 4 ply and a free pattern for another scarf.
In the tones of blues, teal, olive green and terracotta. 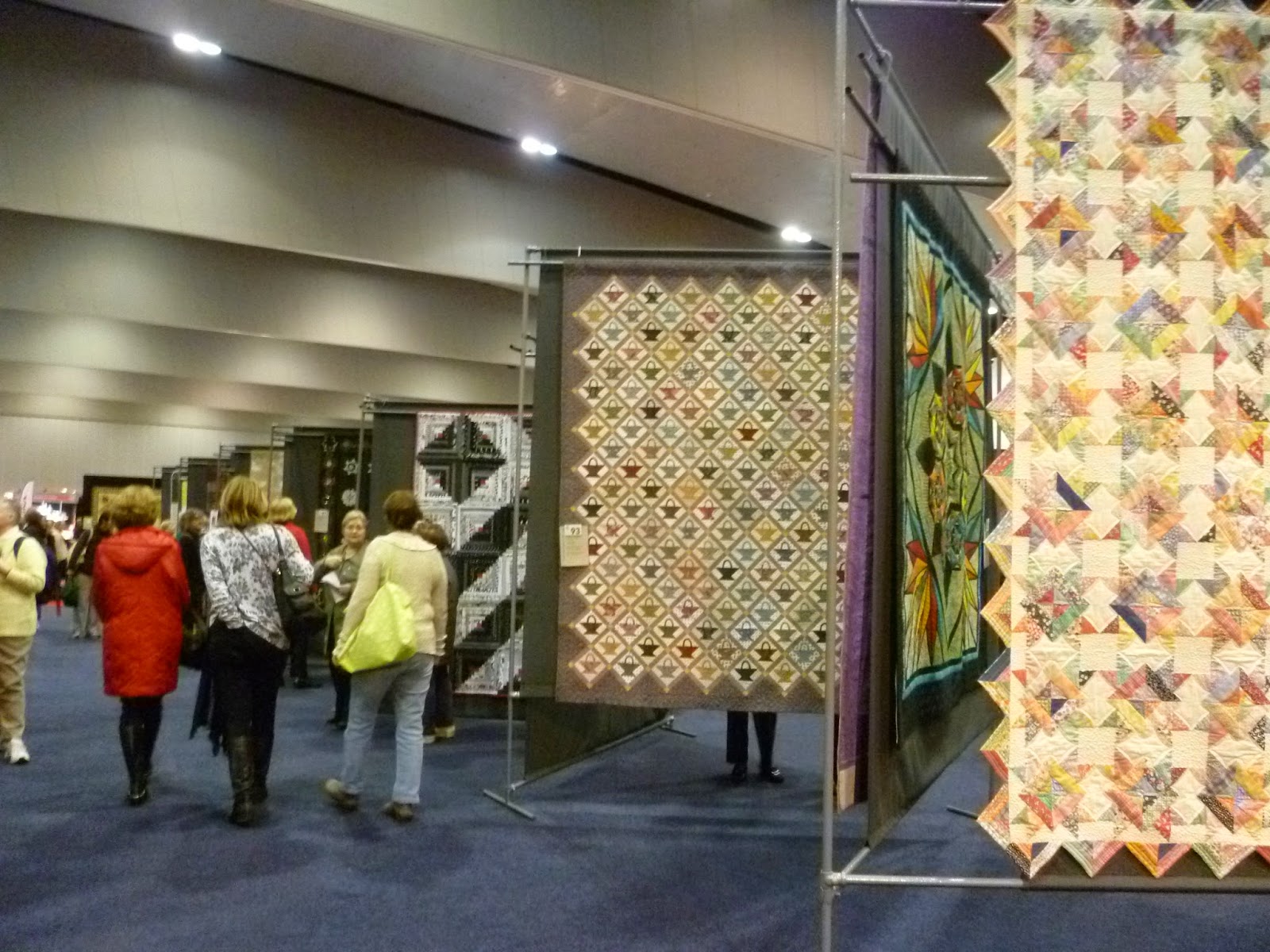 The quilts on display were fantastic. Spent some time knitting at the 5,000 Poppies display. I handed over 49 poppies to Lyn and sat and knitted 2 more. There was a lot of interest. 5,000 was the target and at the moment 19,000+ have been made by knitting, crotchet, felt and fabric. They are now aiming for 25,000 by April 2015 but at this rate they will certainly exceed the number.﻿
Posted by jacaranda at 7:21 AM No comments:

Drove to Mildura for a 3 day weekend to celebrate John's birthday.
He has always wanted to go to Stefano's Restaurant for his degustation with wines to match, dinner.
An amazing meal with beautiful wines. Total of 12 courses, the presentation of the courses were excellent. Thank goodness they were the size of 50 cent coin in the middle of huge plates.
One of my favourites was the citrus palate cleanser. 2 small cubes of white chocolate which you popped into your mouth and then bit into, releasing a lemon and an orange syrup. 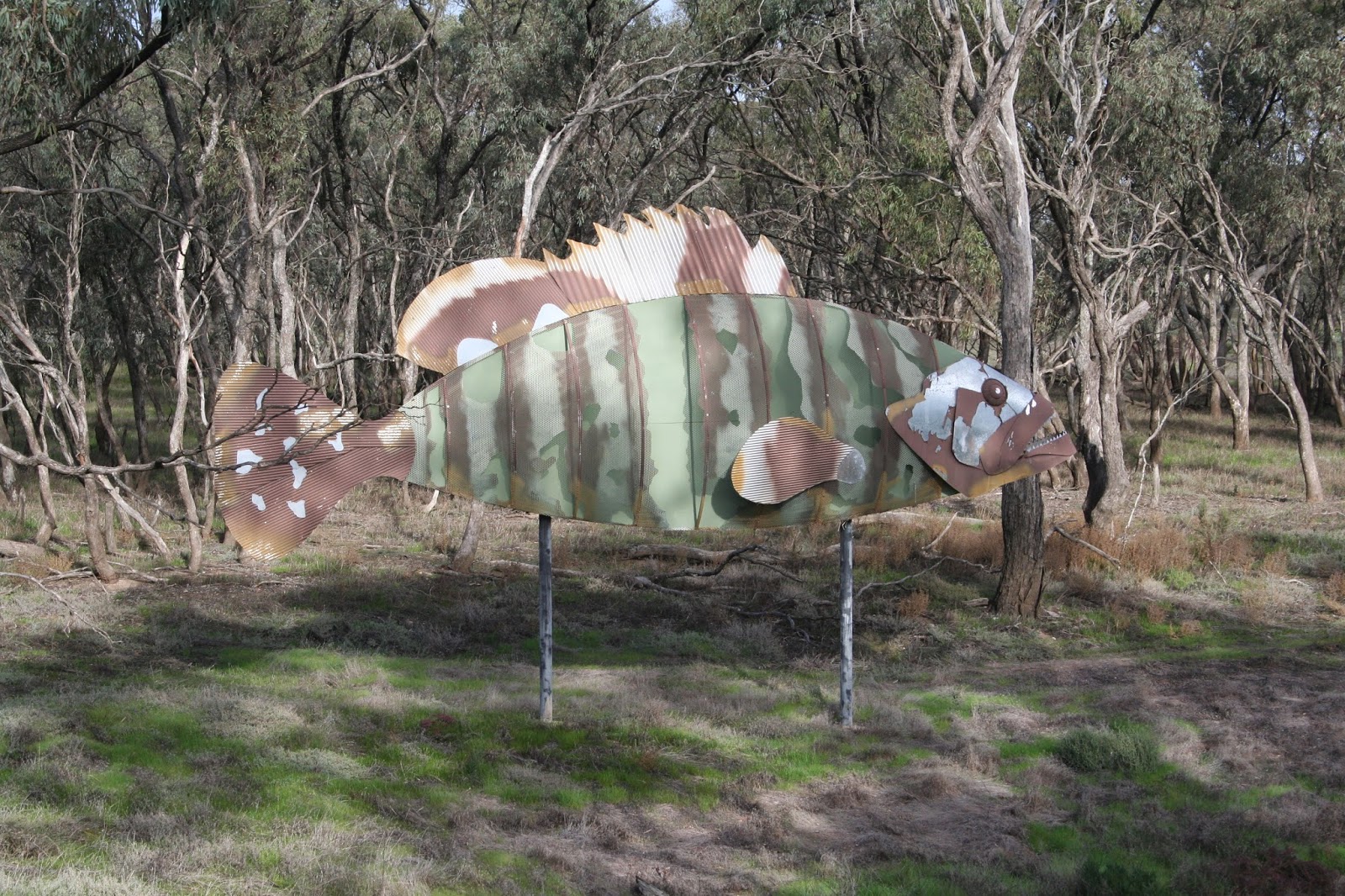 Commonwealth Games Sculpture, alongside the Richardson Rive at St Arnaud.
Unfortunately there was not a sign as to which country or breed it belonged to. 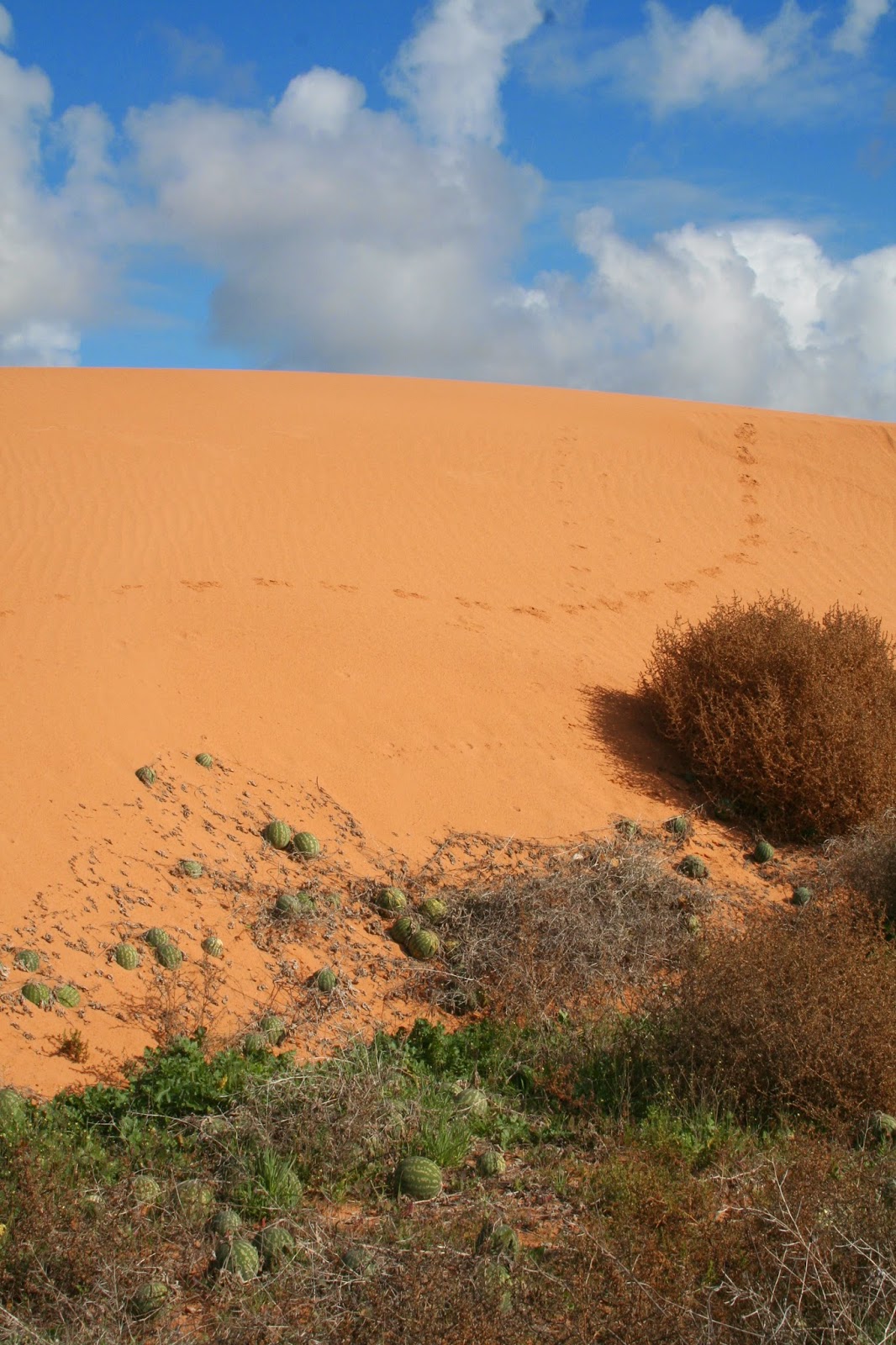 The Perry Sandhills were beautiful despite the thousands of flies, bull ants and wild melons 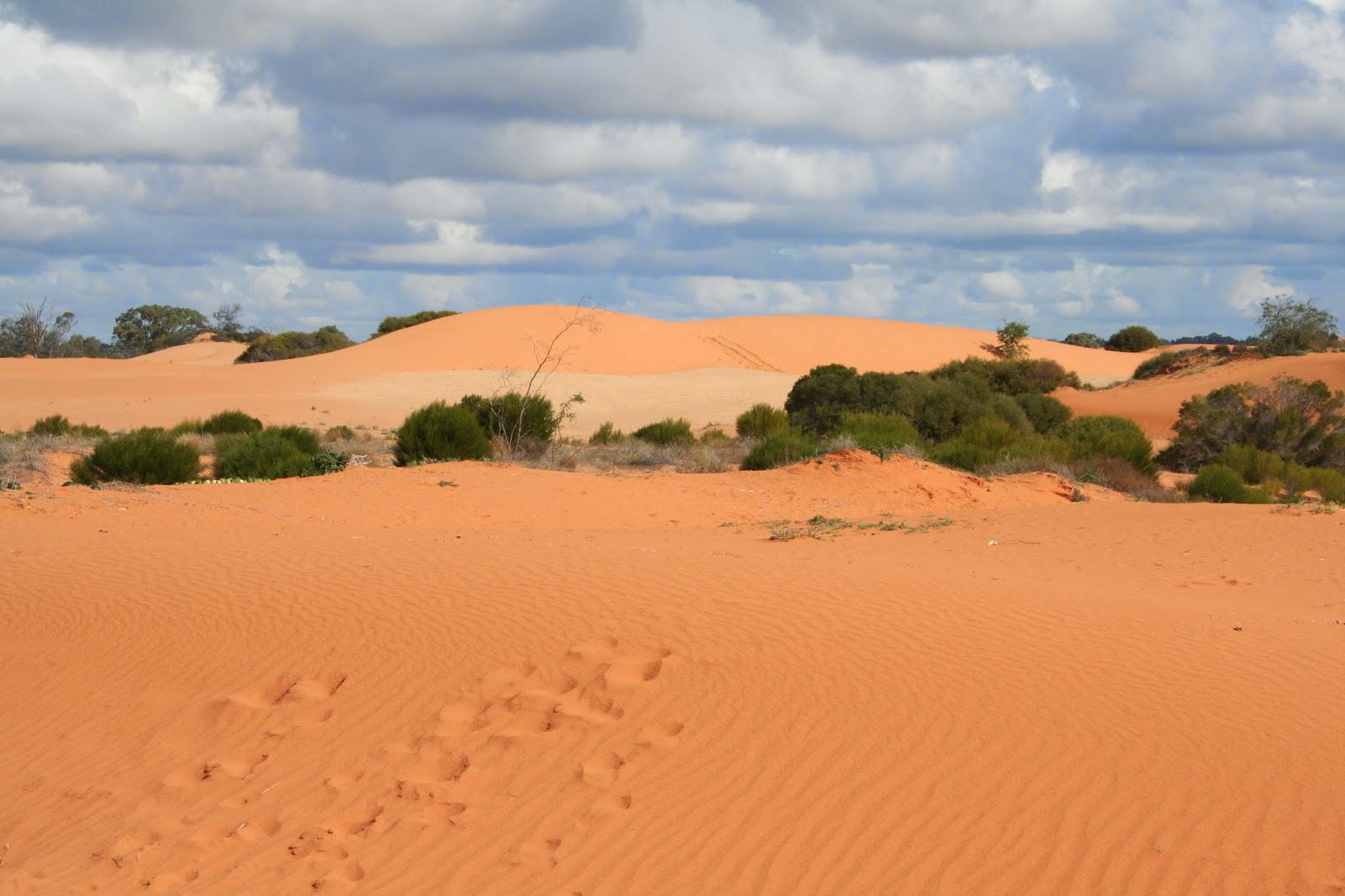 According to geologists, the Perry Sandhills originated after an ice age (40,000 years ago) and are formed by wind erosion over thousands of years. The dunes are located just outside of Wentworth (NSW side), and are a unique land formation of 333 hectares (822 acres) of continuously shifting sand dunes.
Skeleton remains of giant mega-fauna (kangaroos, lions, emus and wombats) have been found there.  Aboriginal tribes used this area to camp and hunt. Evidence of this is still being uncovered as the sands drift. The tops of trees are visible as their trunks are buried in the sand. 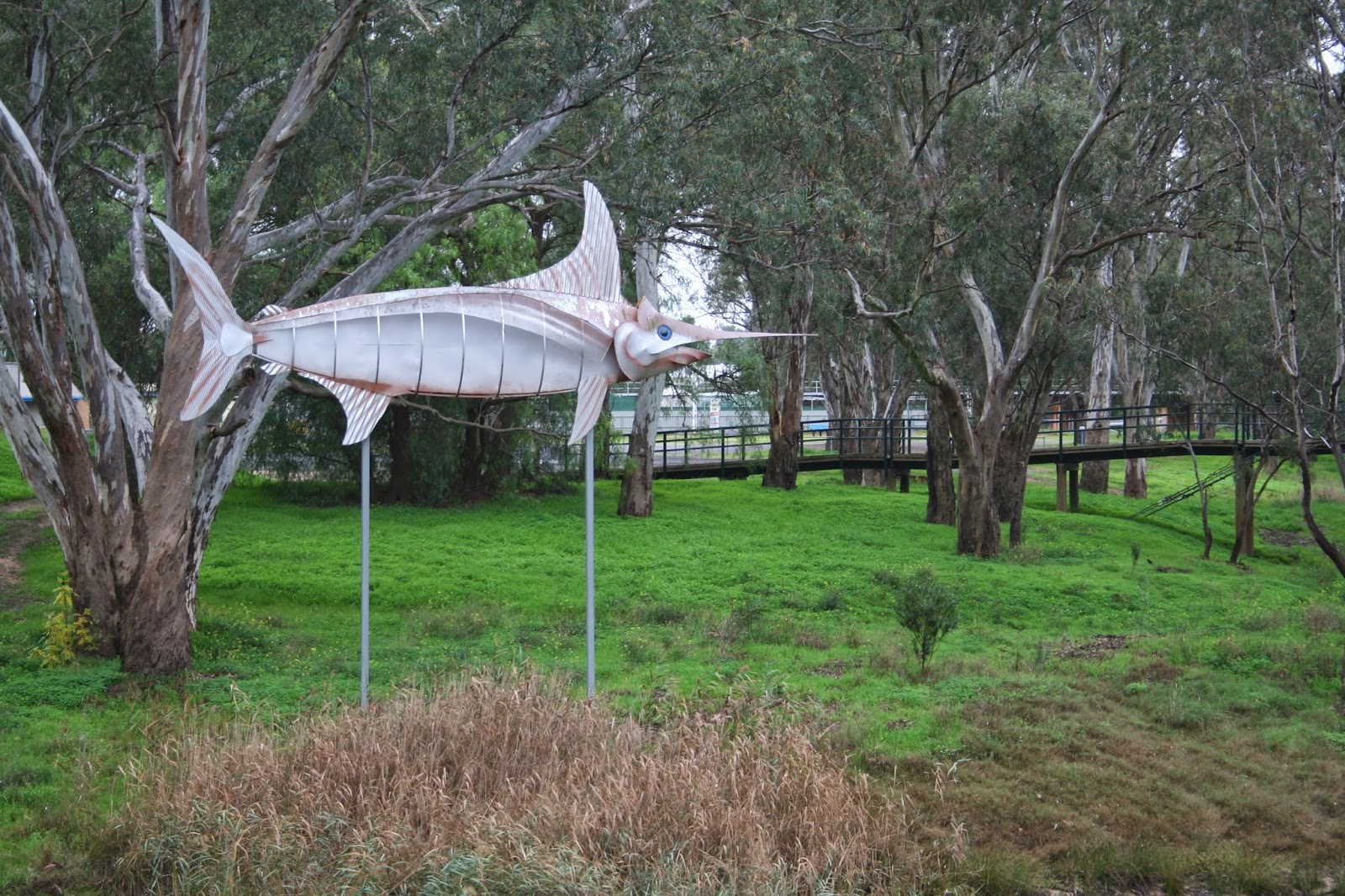 Another Commonwealth Games fish sculpture has made it's way up river, this was at Charlton, the Broadfish from Kenya. 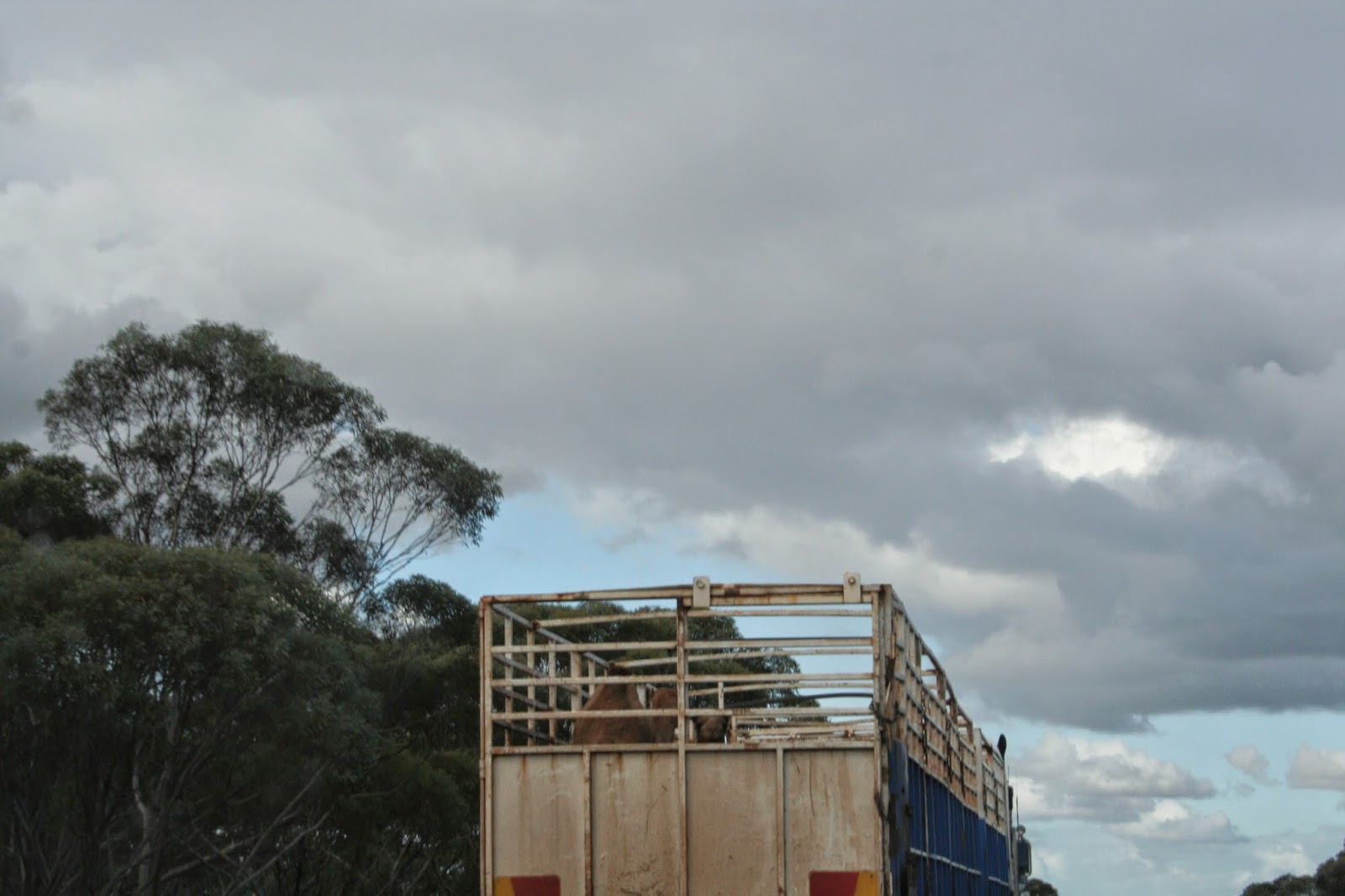 We drove on Saturday afternoon to Robinvale via Euston and I awoke from a doze to see this camel poke it's head up from the back of the cattle truck. 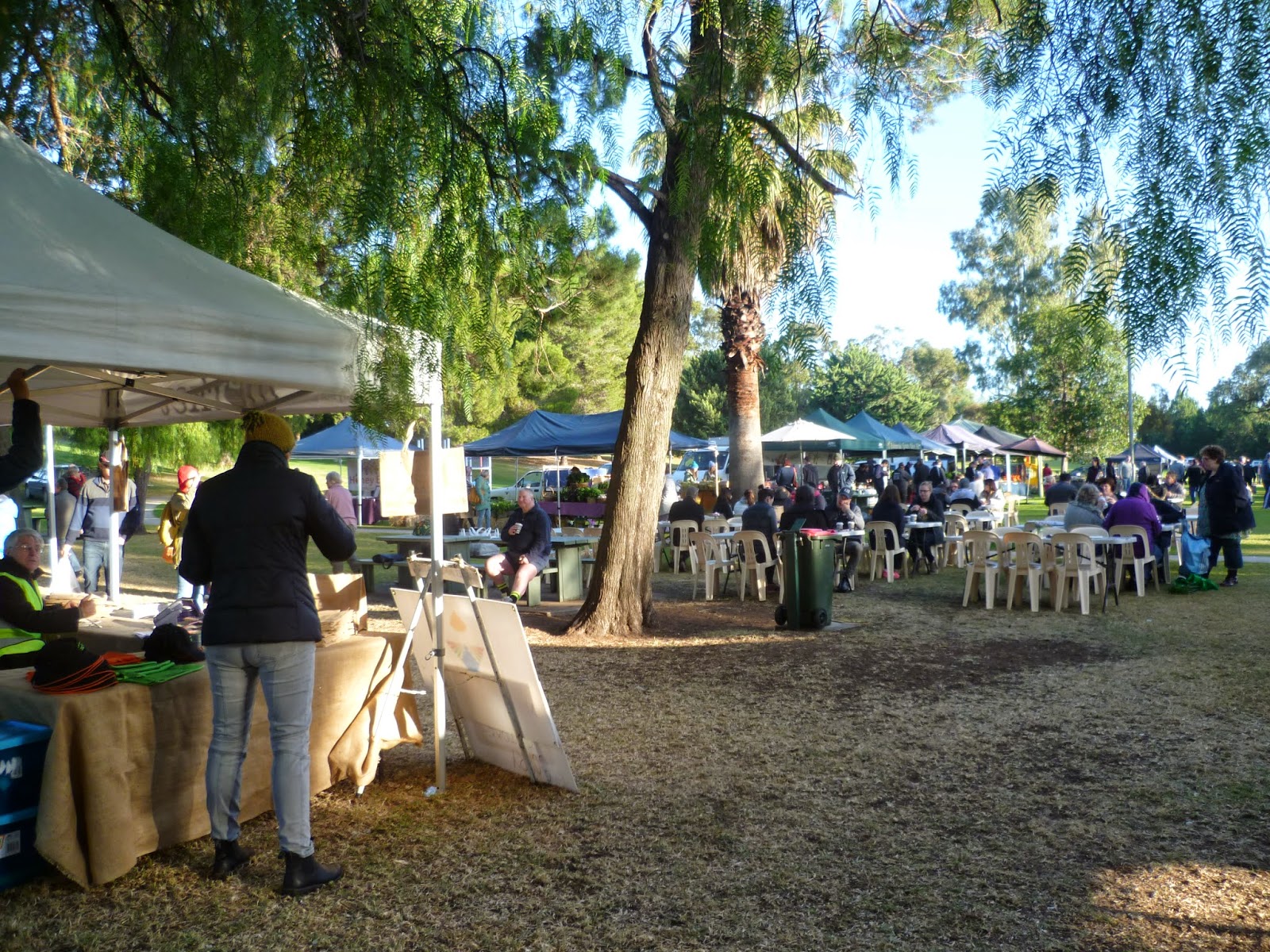 Sunraysia Market alongside the Murray River.
Great egg and bacon on sourdough rolls for breakfast. 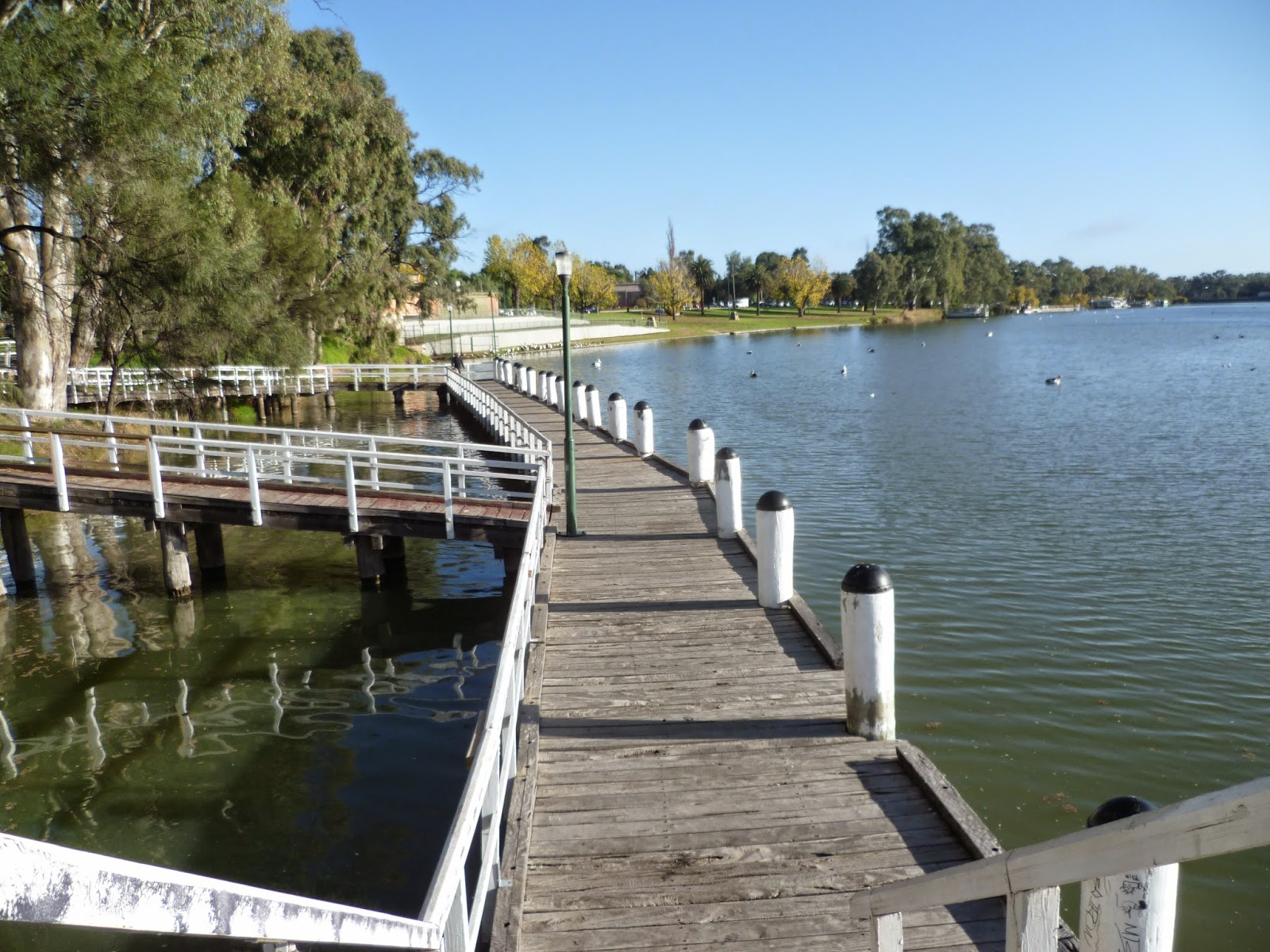 The Mildura Wharf on the Murray. 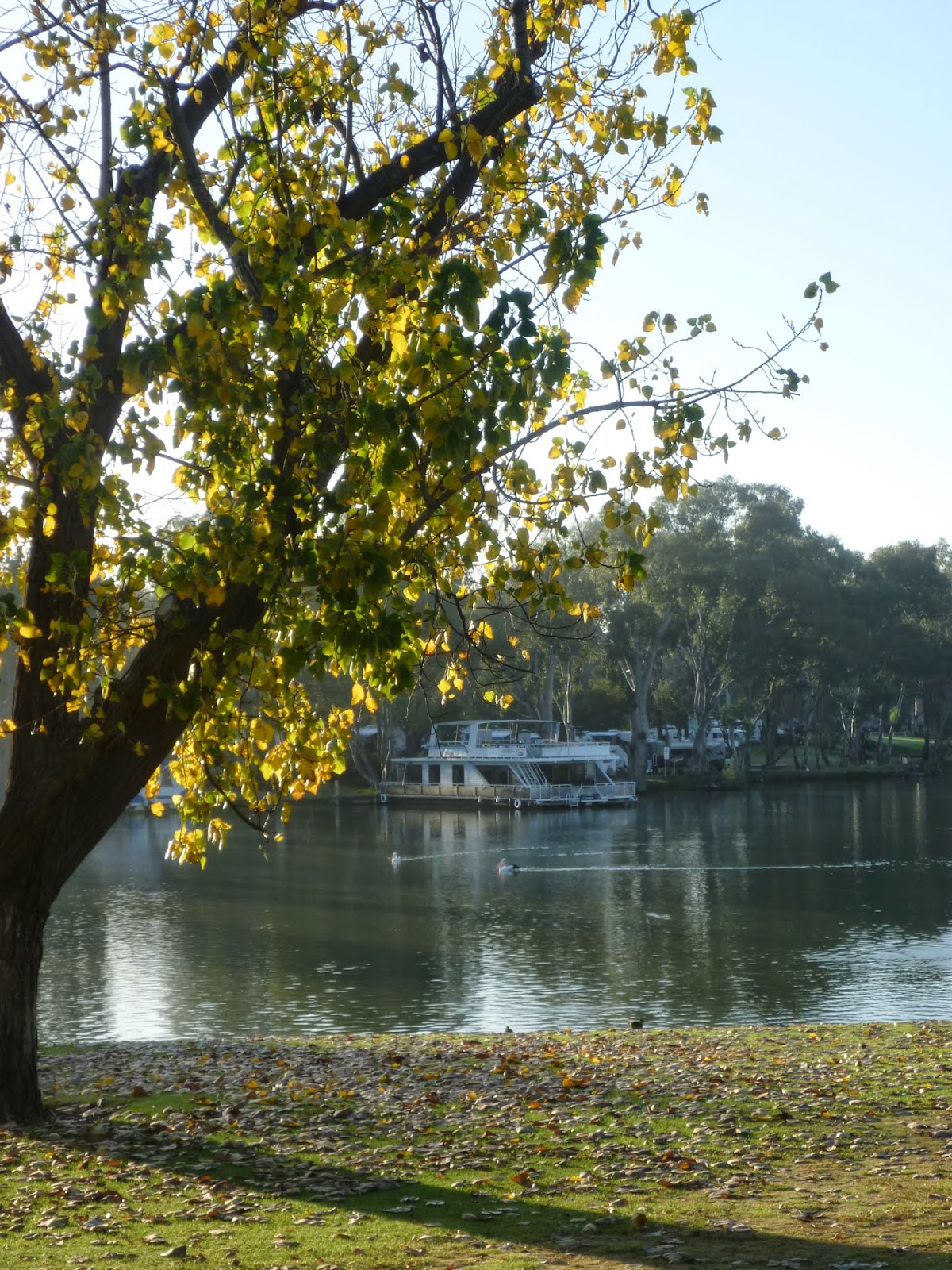 One of the many houseboats.
﻿
Posted by jacaranda at 3:16 PM 1 comment: 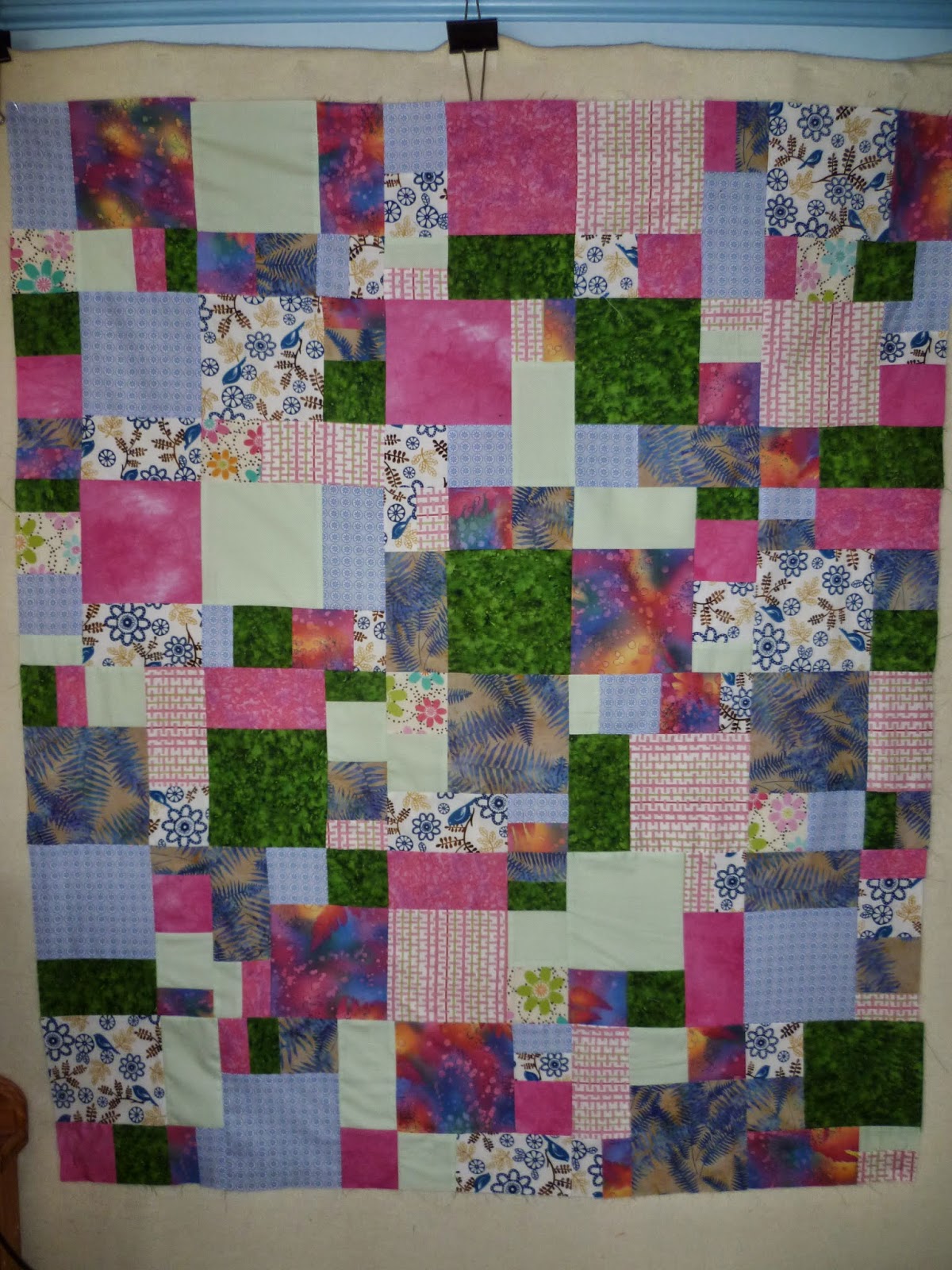 Sewed another lap quilt for donation to Regent Street Quilters today.
The group has a cupboard of fabrics, so they will be able to put borders on the 2 that I have made.
Slowly getting through my stash of fabrics.
Looking forward to the day that I can say I have very little to nothing left in my stash.
Then I can buy and start up a new stash....﻿
Posted by jacaranda at 2:08 PM 1 comment: 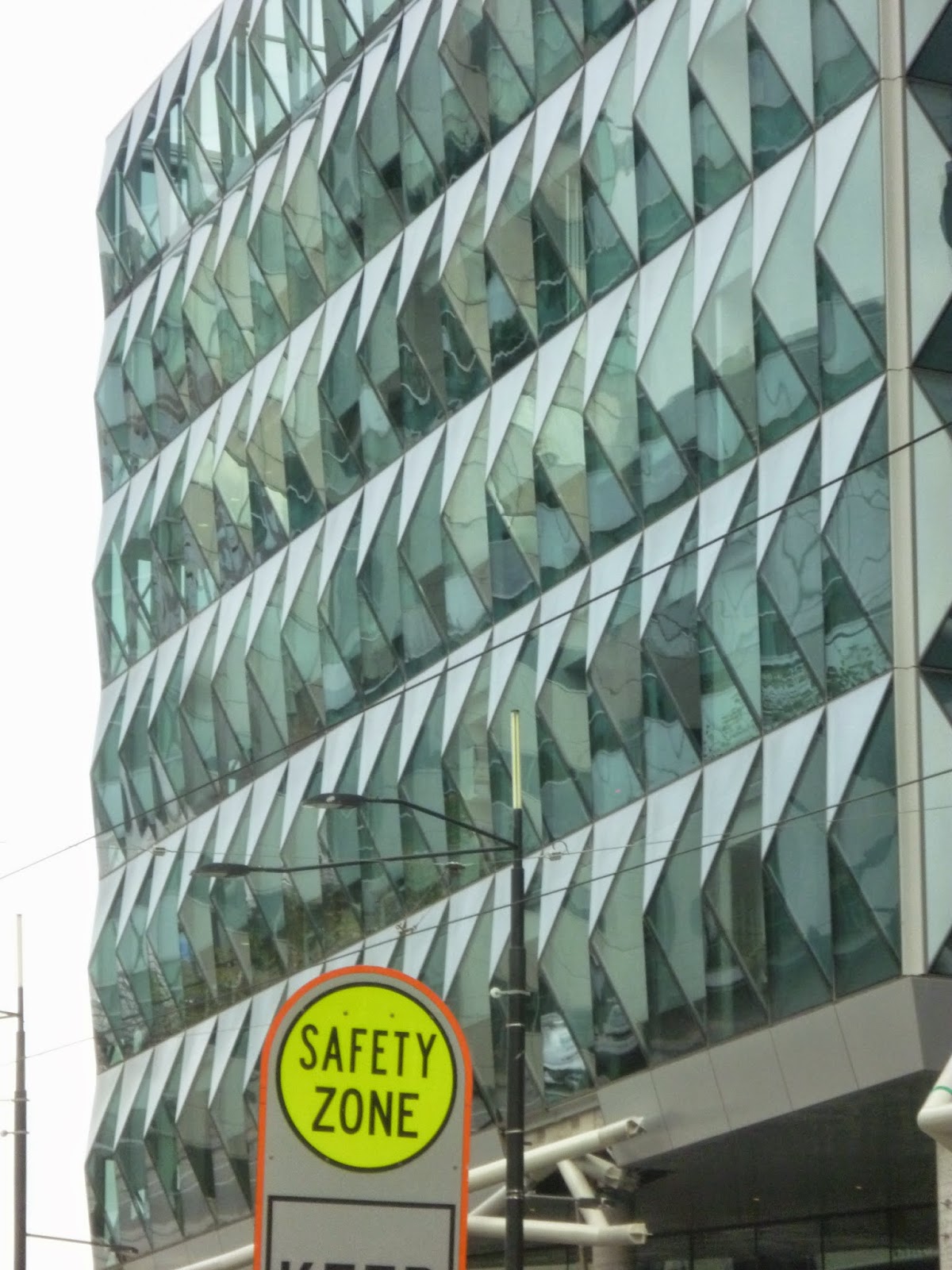 Driving past Etihad Stadium this afternoon, noticed the outside of this building,
Flying Geese, a favourite pattern I love to make up. 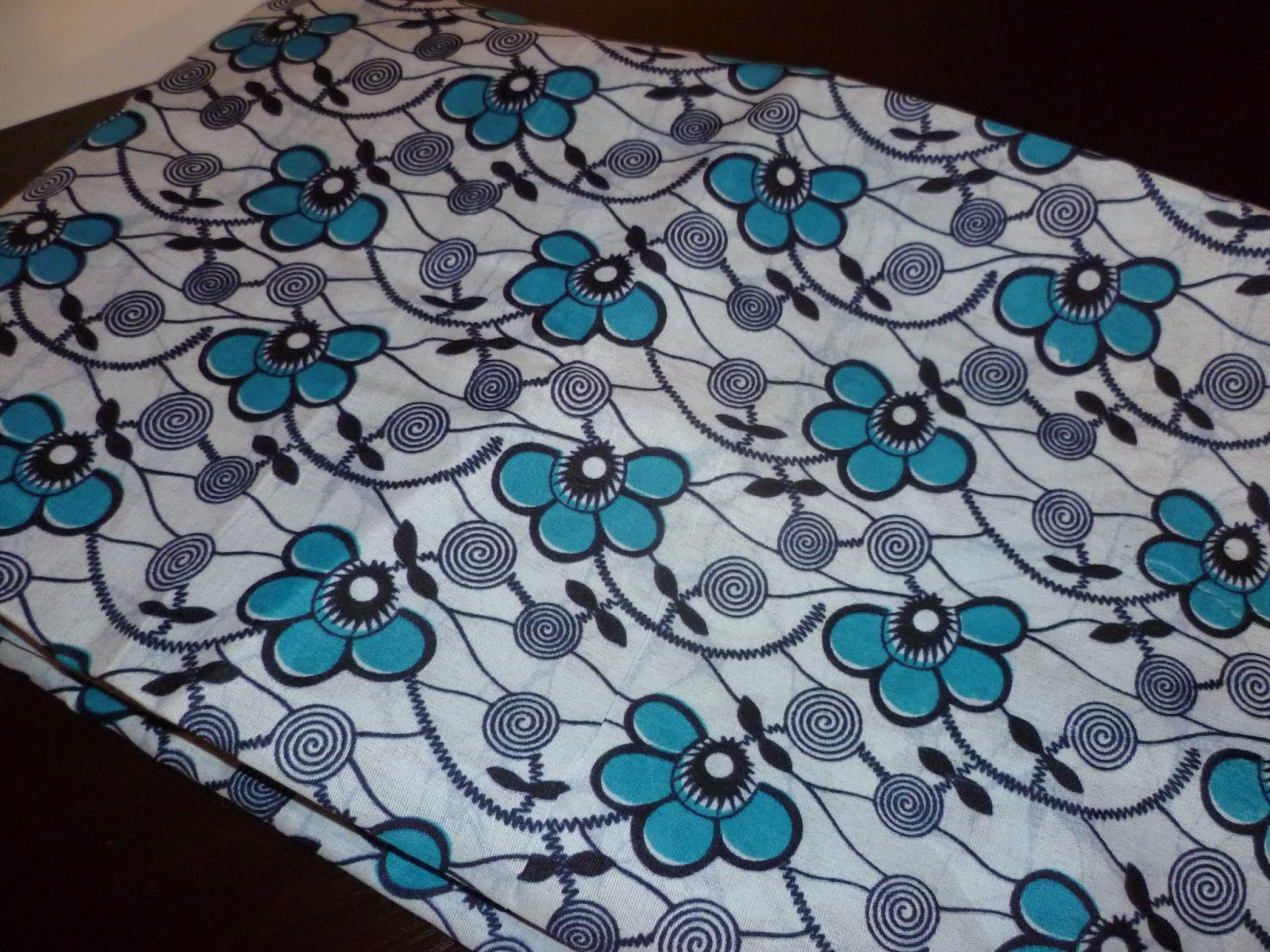 Emma arrived home from Africa late Sunday night with a few treasures for me.
A piece of fabric from a market in Botswana. These lengths of wax dyed fabric are used for head dresses of the women. I have a few pieces also from her previous trip over there, now looking for a pattern to make up. 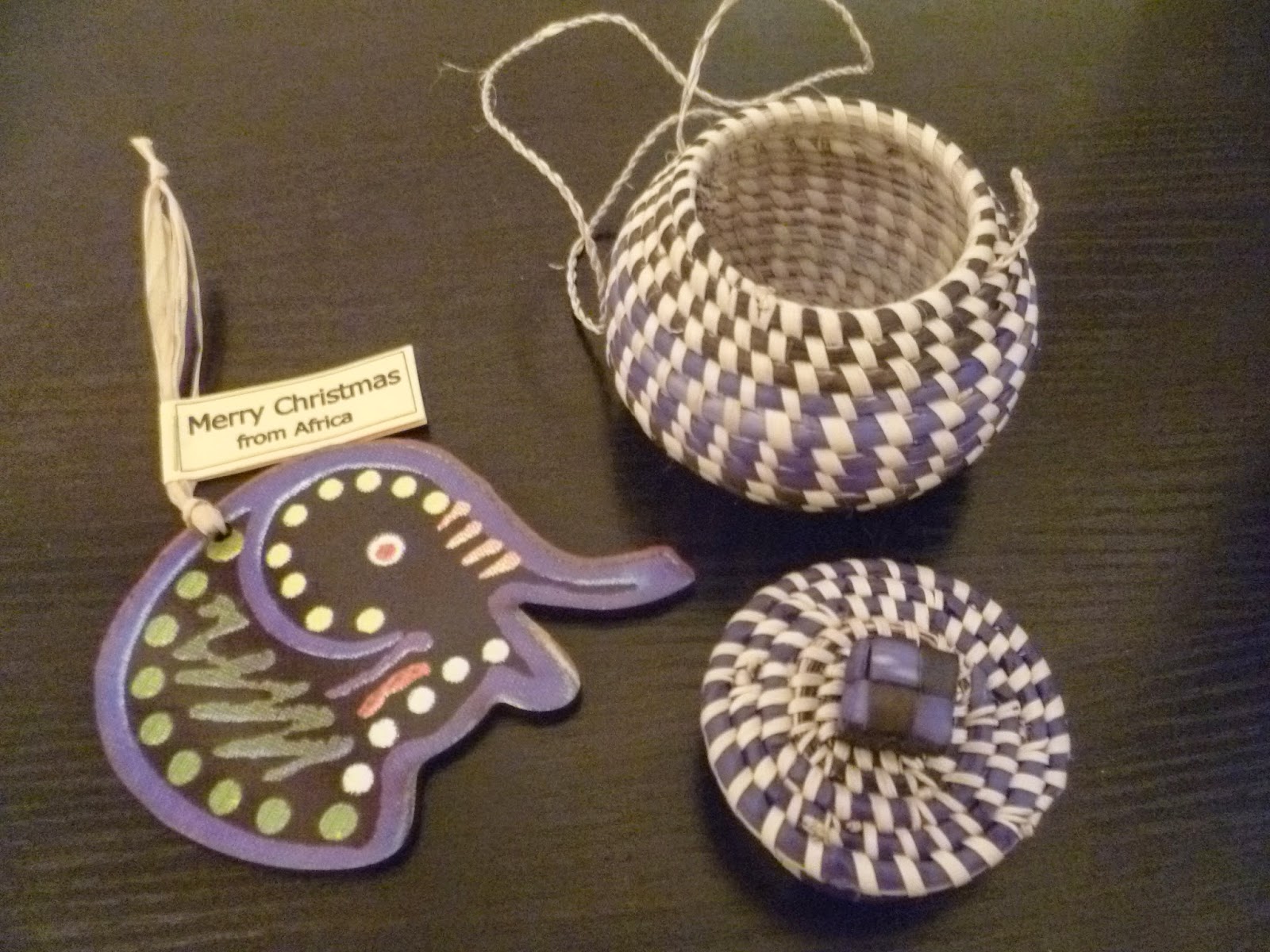 I was also given a little woven pot as she knows I love collecting containers.
We have a tradition between the 2 of us, each trip we collect a Christmas decoration to give each other. A little hand painted elephant, a memento from Kruger National Park.﻿
Posted by jacaranda at 7:40 PM 4 comments:

Caught the train to Mt Waverley yesterday to view the exhibition. The station was conveniently across the road from the hall.
This was one of the best I have seen.
The variety of quilts were excellent and all levels of experience from new quilters to advanced.
It was very hard to choose just one for "Viewers Choice"
The theme was Red and White with 2 rooms, The White Room and The Red Room showing them off. Members challenge were A4 size "Red and White with a little Black". They were displayed on a black background, fantastic, very impressed.
Many stall holders were in attendance, café set up serving a variety of plates.
Caught up with several friends and a few that I hadn't seen in a while. 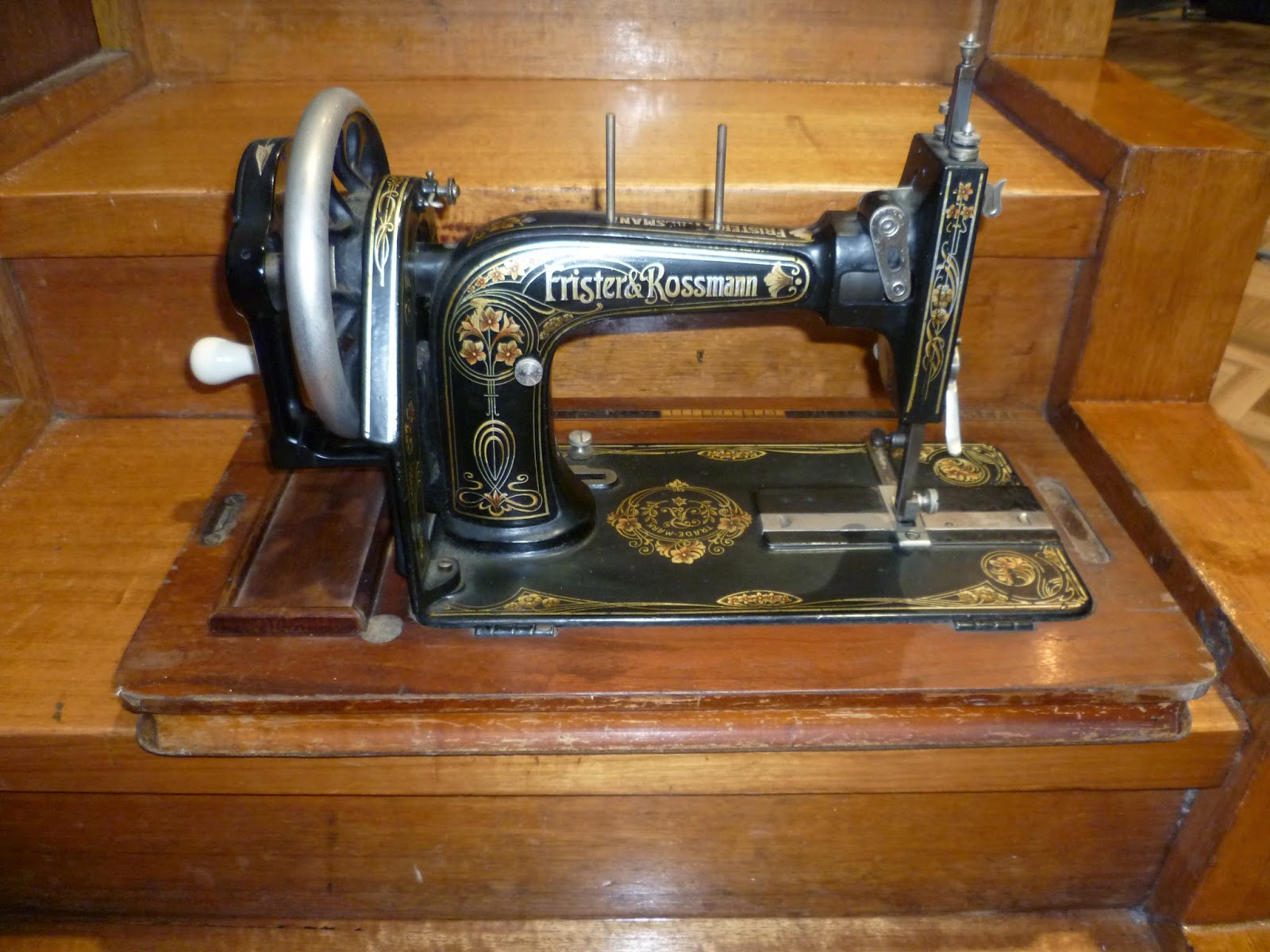 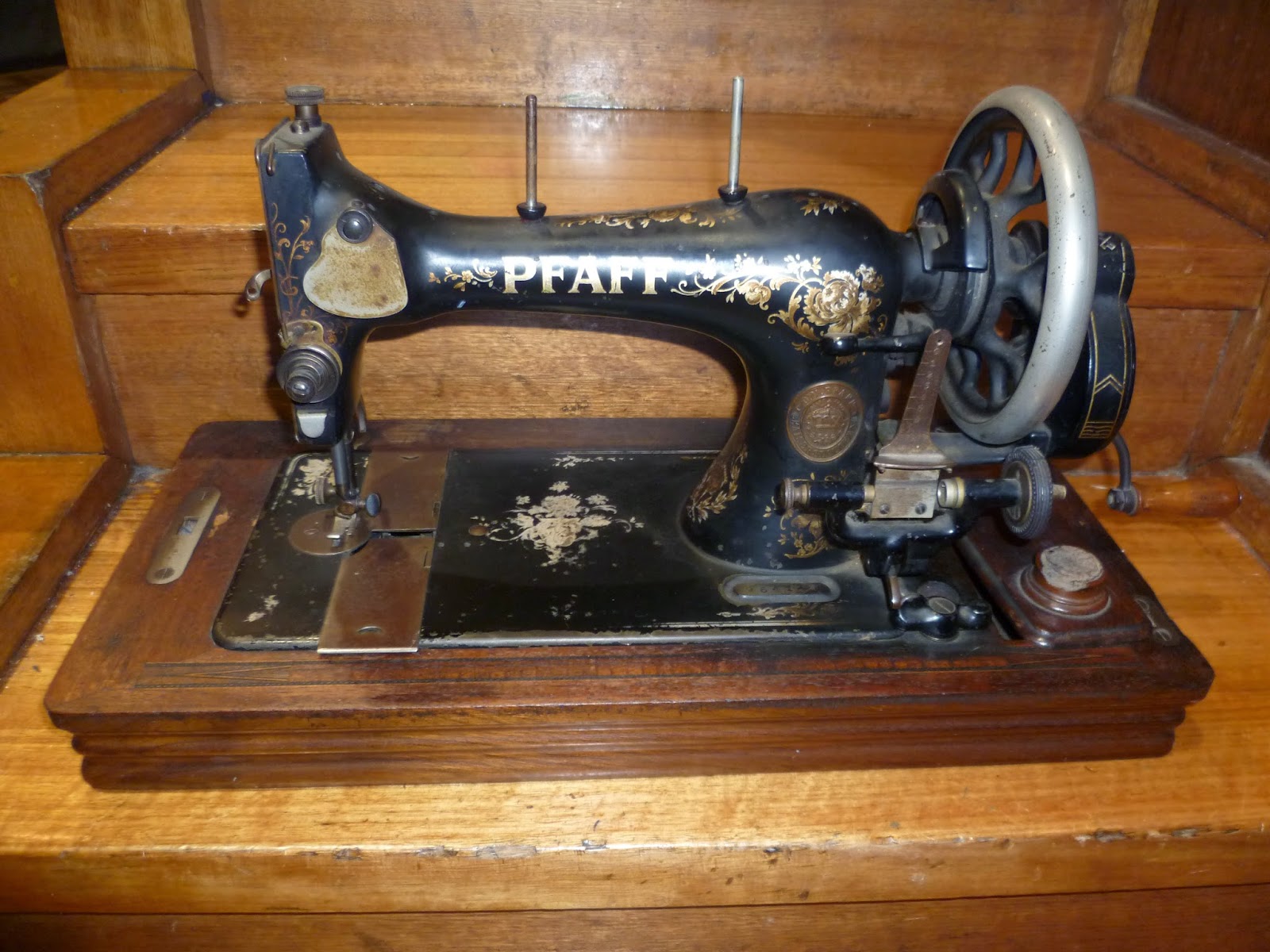 These 2 machines adorned the steps of the stage. 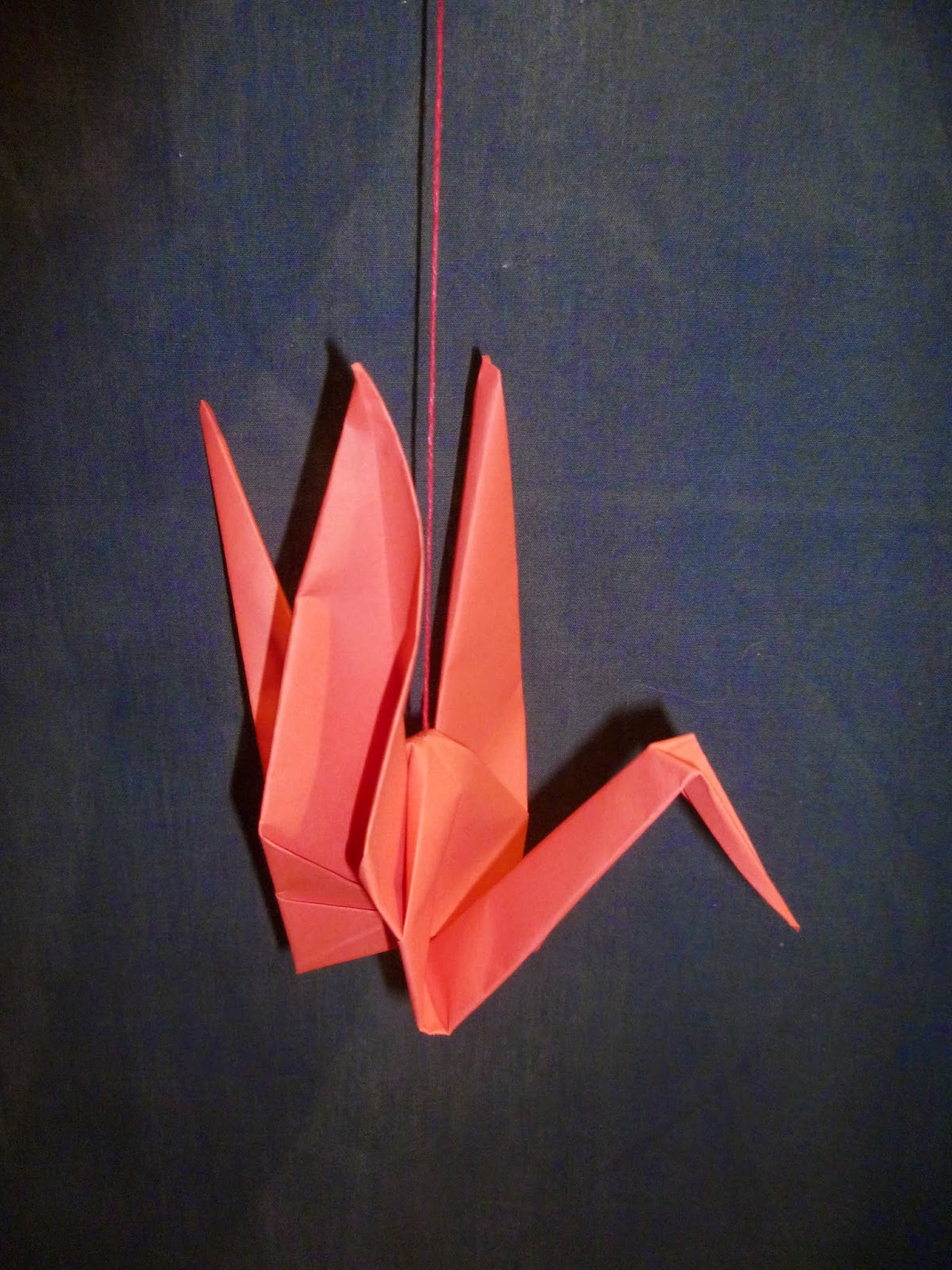 Red and white origami birds decorated the tables and walls.
Congratulations to their President, Jeanette H. and members on a wonderful showing of their quilts.﻿
Posted by jacaranda at 12:39 PM 2 comments: