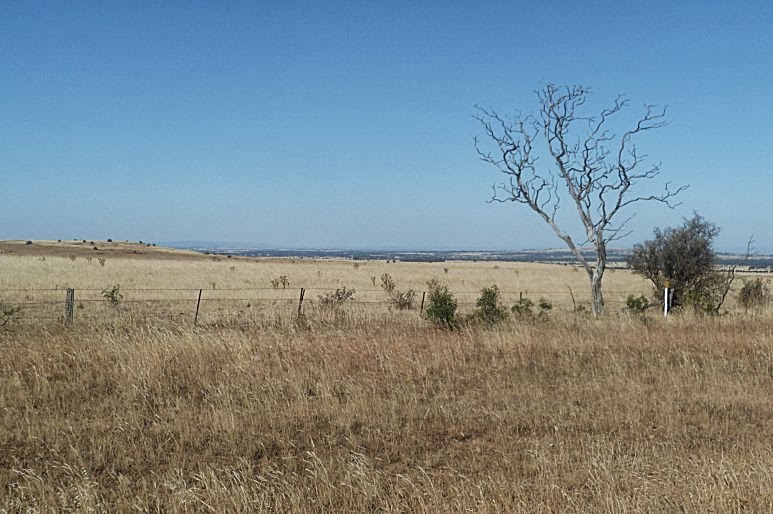 Happy Australia Day.
Posted by jacaranda at 6:36 PM No comments:

A new project has been released for 2014 by Barbara Brackman
http://civilwarquilts.blogspot.com.au
(To read more go to website)

The theme Threads of Memory refers to the Underground Railroad. Each month you'll get a block named for an important place in the story of the network that assisted slaves on the road to freedom. We'll explore true stories of people who lived in slavery, escaped on the "Liberty Line" or helped the fugitives.

The twelve blocks will finish to 12" and each is an original pieced design for a star block.
(No applique!)

The first block in the 2104 free block-of-the-month here at Civil War quilts is Portsmouth Star, a new block with an old-fashioned look, named for Portsmouth, New Hampshire. The coastal town was a place of refuge for Ona Judge Staines and uncounted other African-Americans looking for liberty. The townspeople, as John Whipple informed George Washington in 1796, were “in favor of universal freedom.” 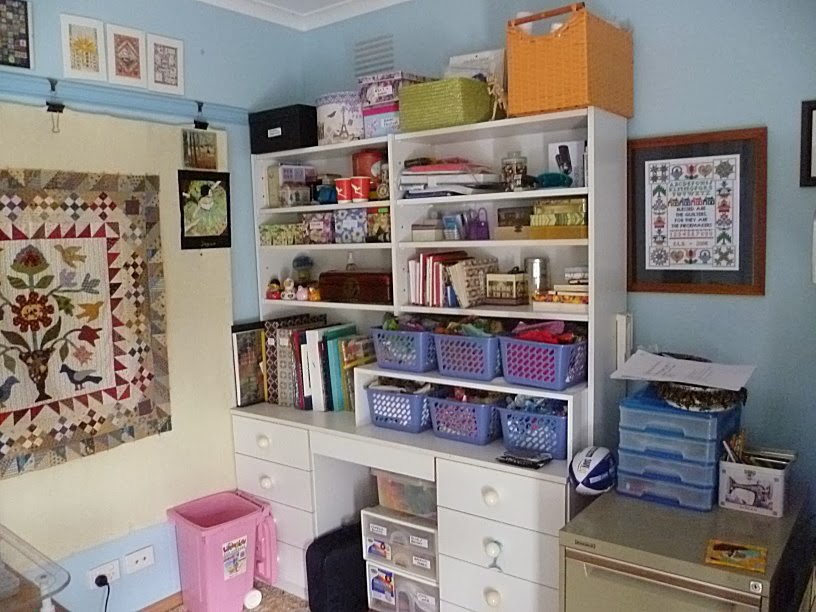 I went to one of the drawers to find some thread and on the spur of the moment
decided to have a throw out before the rubbish bins were emptied at lunchtime.
Going through all the drawers and the shelving of my wall unit, I filled 5 supermarket rubbish bags.

Why would I keep a piece of paper, 4' square with nothing written on it?
Threw out 15 biros, none of them worked.

The 6 blue baskets, 2 square containers under the desk and one of the drawers are all the fabric I have left.
I am determined not to buy anything until it is all gone....who am I kidding!!! 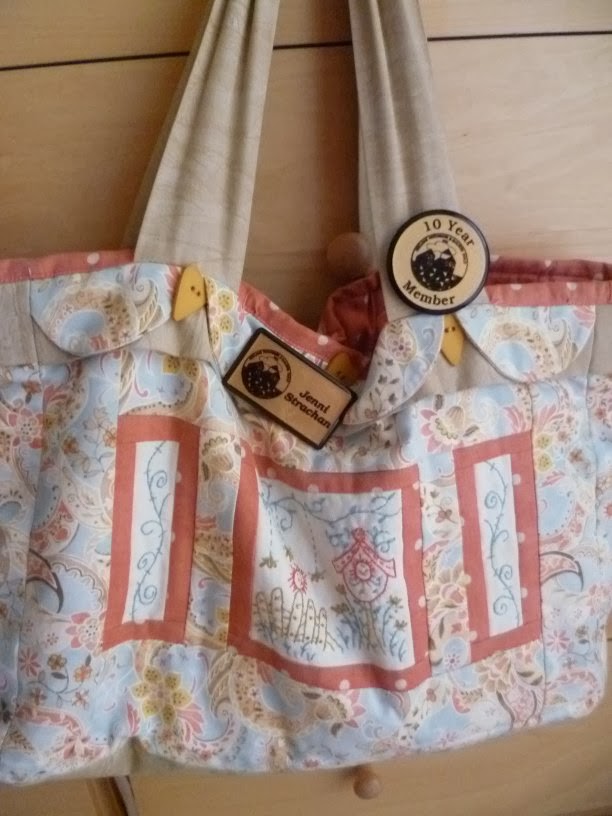 I received a lovely surprise the other day.
I was given my 10 year membership badge from Geelong Patchwork and Quilters Guild.
I didn't realise it was that long as I had a break from Guild for nearly 3 years before rejoining.
Time certainly flies when you are having fun.
Posted by jacaranda at 8:48 AM 1 comment: 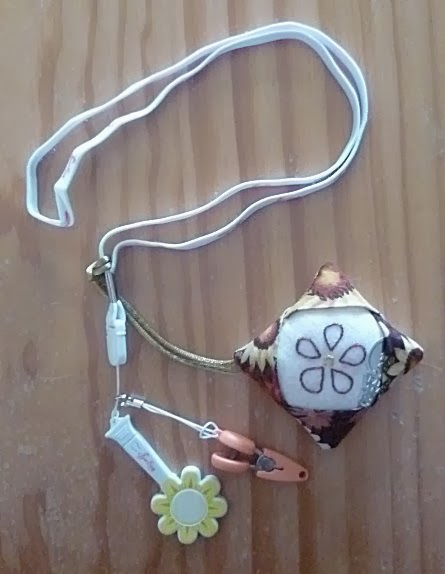 I was asked on the weekend, what do I take on the plane when we holiday overseas.
I take this lanyard with me. Put it around my neck and there is no chance of me dropping it etc.
Little pair of scissors, pin cushion with a few pins and a couple of needles tucked in under the "cathedral window" flaps and my daisy needle threader and cutting blade.
The steward on the flight noticed me embroidering my Sentinel and asked if a lady a few rows down could borrow my needle threader. She had lost a button off her jacket. Unfortunately she broke it on the first attempt to thread her needle (unfortunately no apologies when she handed it back).
I found a threader in the hotel sewing kit and it tucks into the flaps of the "cathedral window" of the pin cushion. The lanyard is very light to wear and carry. 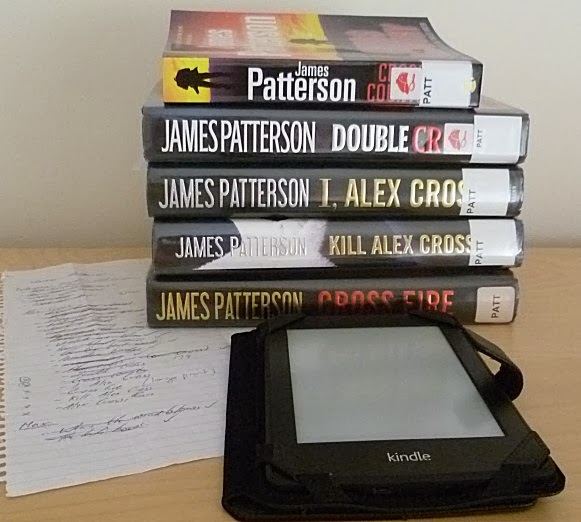 Isn't it strange how you are so used to doing something yet it doesn't take long to change it.
I vowed I would never get a Kindle as I love the feel of the paper of books and their covers.
I eventually got talked into it and Emma wrote me a list of James Patterson's books.
Crossing them off the list, have had to resort back to library borrowed hard covers as I can't get the last 7 on my Kindle.
I read 6 Kindle books while I was overseas, imaging having to take that many books with you, it would be excess baggage!!!
Posted by jacaranda at 11:11 AM 1 comment: 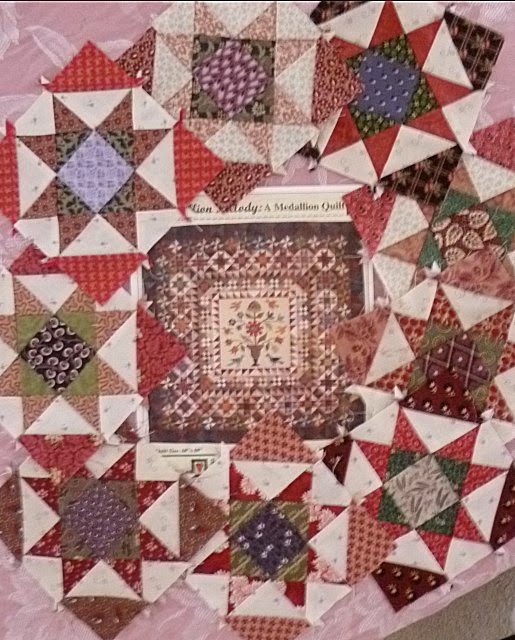 Slowly getting there. Once I finish this border will have to work out what colours to do the next border.
For the last several years I make only one quilt and don't start another till it is finished.
Broke that rule last year, I have to finish machine quilting my "Longbourne", only 1 1/2 borders to go, but at the moment not allowed to use the foot pedal on my machine. So all sewing has to be hand piecing.
The day will come when the Dr says "go for it", hope it is sooner than later!! 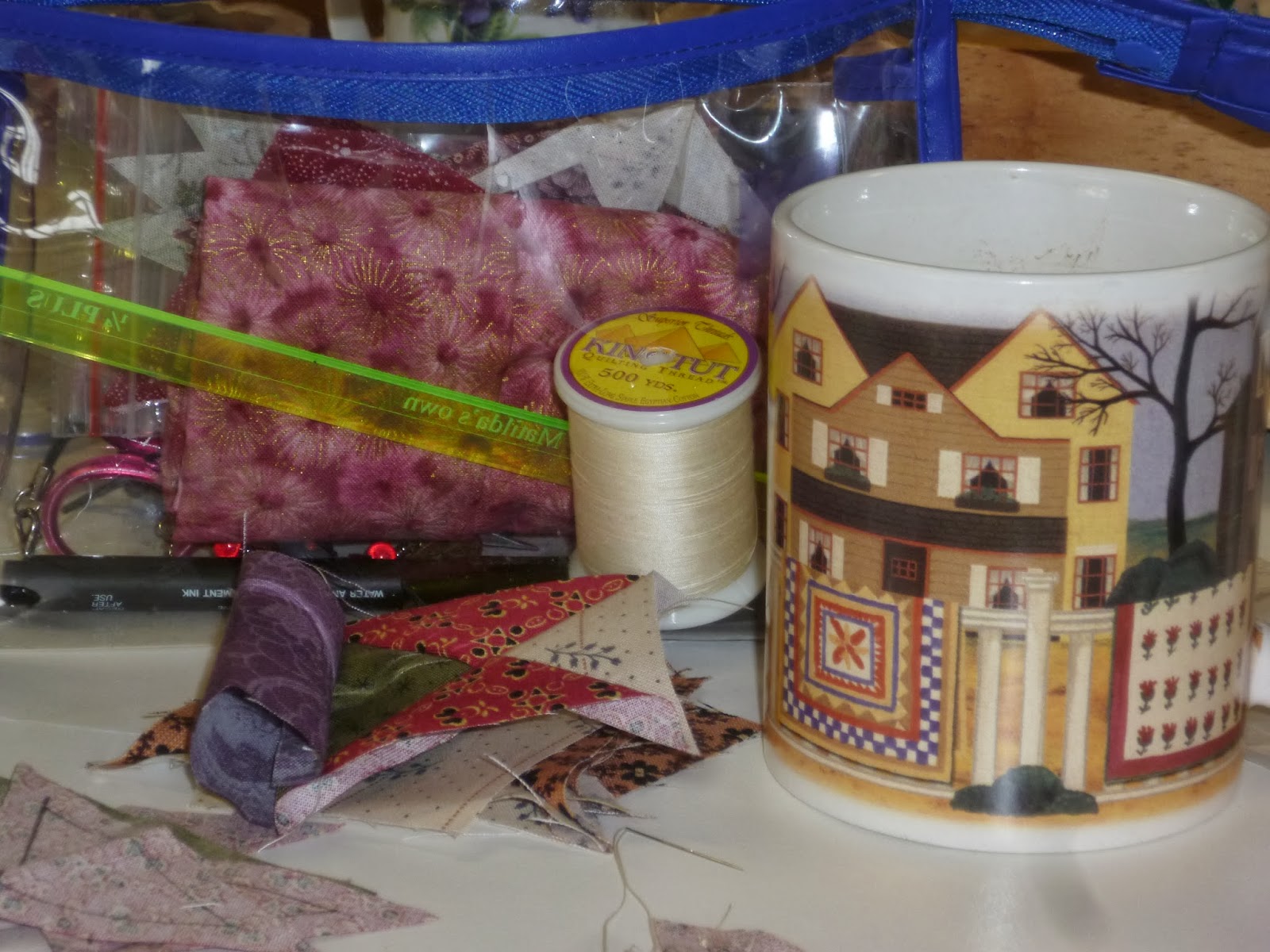 Today, went to the Wyndham Patchworker's Sit and Sew afternoon.
Finished another star block made for my Medallion Quilt. 10 now made. 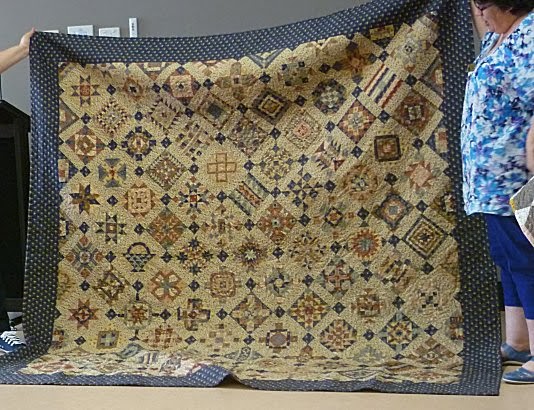 My friend Sue, showed her "Nearly Insane" Quilt made with Civil War fabrics. 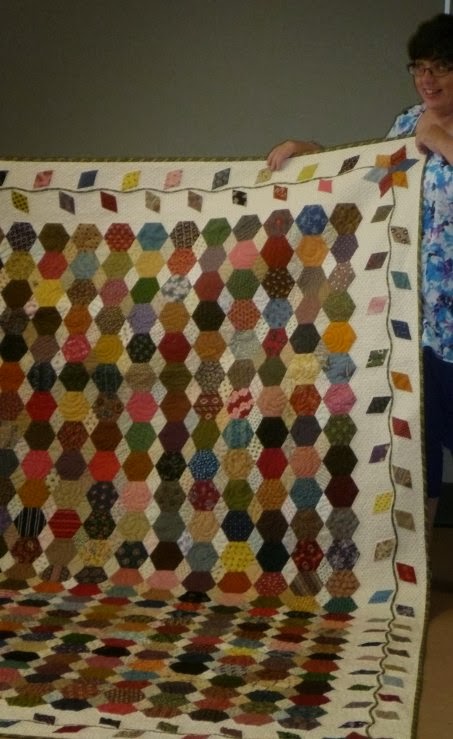 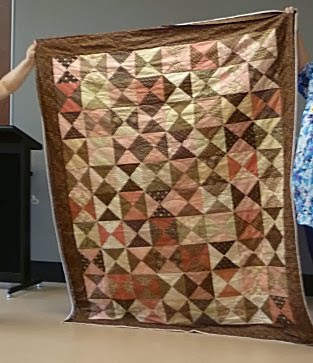 My friend Bernice, found this UFO from many years ago in pinks and browns.
Quilted with clam shells and binding in the process of being stitched.

It's Summer, it's HOT

Have been sitting under the air con for the past couple of days, stitching, reading and sleeping on the couch.
It's summer, and unfortunately the heat is just part of it.
****************
The Bedford Mystery Quilting Challenge is back again in 2014 and for the first time I have ordered the kit.
The last 2 years I have been too late to order and it has sold out. Got in quick this year.
I have seen many of my friends make it up and the designs have been amazing. Looking forward to making it myself and at the same time helping to raise money for the those with a disability and are disadvantaged.
http://www.bedfordgroup.com.au/whats_on/past_events/bedford_mystery_quilt_challenge

I have decided to close my 365 Days of Photos Challenge for 2014.
I loved doing it last year, but at the moment, as I am unable to drive as yet, I am not motivated to take photos that can only be done in my residence.
Thank you to those who stopped by to take at look at 2013. I hope you enjoyed my daily photo.

Today I need to cut out some more triangles for the border of my Medallion Quilt, read the last 7 chapters of  James Patterson's "Cross Country" and generally vege out on the couch in front of the TV.

Before Christmas I had a big throw out of shoes that have been in my wardrobe for the last 10 plus years and now realise I don't have a pair of summer sandals.
I feel the need for some retail therapy coming on this weekend.
Pity I can't cull some of the 30 plus year old fabric in my stash.

Posted by jacaranda at 10:00 AM No comments:

I watched an interview with Karen Nyberg who is currently working on the International  Space Station.
Karen is a quilter and made a star block. It was interesting, I don't know how she managed cutting it out etc. with zero gravity.
Karen has asked for quilters to make a star block to be sent to the 2014 Houston Quilt Festival.
Astronomical Quilts! Block Challenge

You are invited to participate in a block challenge…with NASA Astronaut Karen Nyberg!
While on board the International Space Station, Nyberg created a star-themed quilt block that will be returning to earth with her. Her block will be combined with other blocks submitted by quilters to create a quilt that will be displayed at the 2014 International Quilt Festival in Houston. (See a video of Nyberg--with her block--on board the ISS!)

How can you be a part of this exciting project? Submit your own star-themed block!

The details:
We can’t wait to see all of your stellar creations!
Download a PDF of the Astronomical Quilts! Block Challenge rules and details
Posted by jacaranda at 7:35 PM 2 comments: 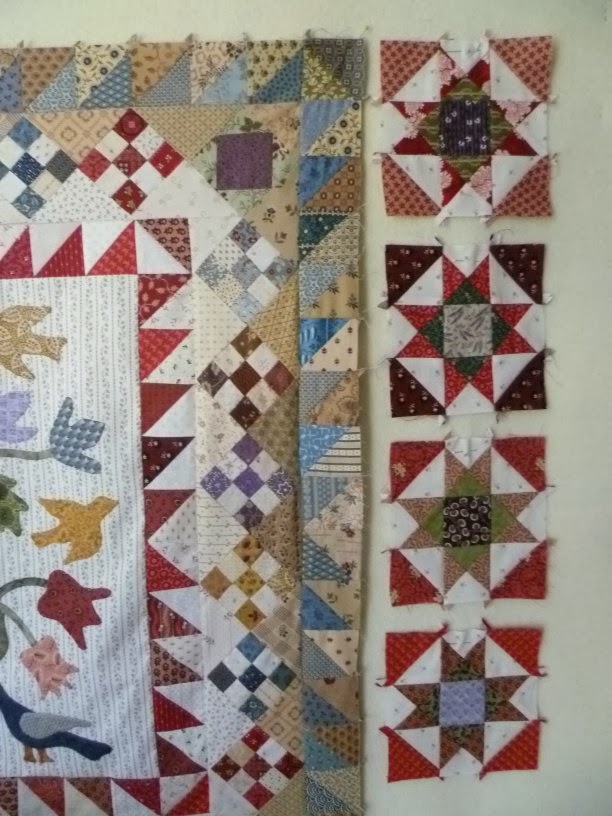 Hand pieced watching the cricket.
After this, 2 more borders to go!!
Posted by jacaranda at 2:56 PM No comments: 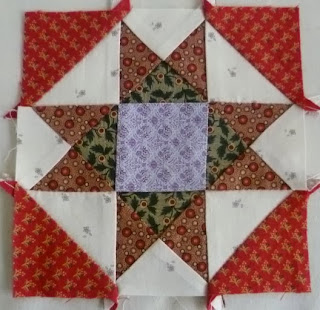 A bit of hand piecing watching the cricket.
Posted by jacaranda at 5:02 PM 1 comment: 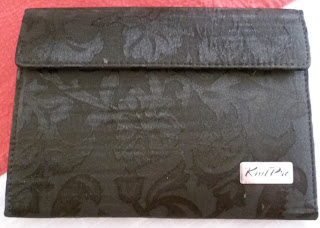 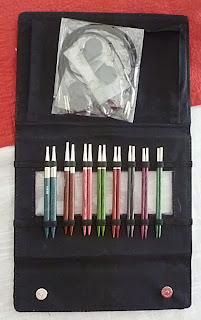 Our Scquilter CBD group meets at the knitting shop Morris and Sons in the centre of Melbourne.
I have been eyeing off knitting needle sets for a while now.
I looked for them in Scotland, London and  France but was unable to find them in any of the shops.
My neighbour mentioned to me the other day that there was a big sale at the knitting shop and Emma happened to be in the city at the time. I now have a set.
I have a box of various textile, sari, silk and wool balls, I think I might knit them up to make a cover for my collection of Journal and A4 quilts.
Posted by jacaranda at 8:44 AM No comments:

My new photo challenge for 2014 will be a word per week.
From Wednesday to Tuesday, I hope to take a photo of that subject.
﻿
This first week's word will be "Garden".
Posted by jacaranda at 7:27 AM 1 comment: