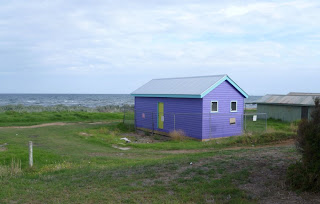 Purple - LAVENDER BEACH SHACK
It was by pure chance that I saw this purple shack at Campbells Cove, Point Cook.
We went for a drive to have a look at the new marina being built at Werribee South, and as we drove around the bend, this shack appeared.
There are many old and small fishing shacks along the edge of the bay, this one looked out of place.

Sky - skyLINE
I never tire of sitting on the edge of the bay at Williamstown overlooking the skyline of Melbourne.
A great place for seeing the fireworks on New Years Eve.
I am originally from Sydney and you can't compare the two cities, but Melbourne is home for me.
It is exciting to travel overseas but it is always great to come home. 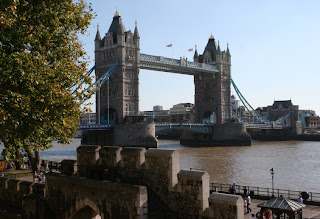 City - LONDON
My parents sent me to London when I was 20 to "learn life".
I fell in love with the city of London and it took 38 years to return for a visit.
The plane landed at Heathrow, I was a little emotional, I felt like I had never left the place.
We walked around the city without a map, I knew exactly where I was heading and didn't get lost. 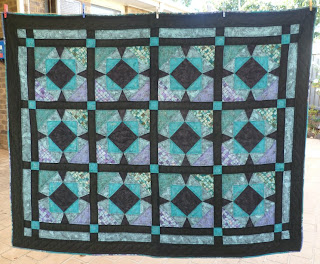 Lap quilt - CORSAIR
I made this lap quilt in 1995 for my husband.
He until recently scuba dived and I called it Corsair, which was the name of the dive club boat.
Black fabric - he loves night diving
Green, light blue and mauve marine fabric - this is the colour of the water at times out on the bay
Quilting - rope on borders to represent the shot line they use to go do to the bottom.
and  shells in the centre blocks.
I recently washed it and was surprised it didn't fall apart.
Posted by jacaranda at 1:25 PM