Morning at the Zoo 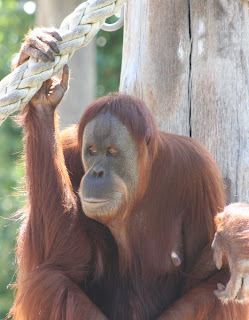 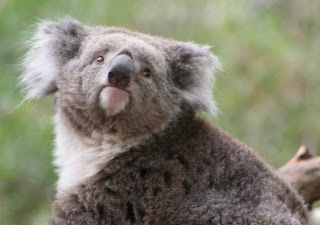 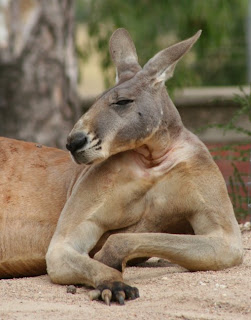 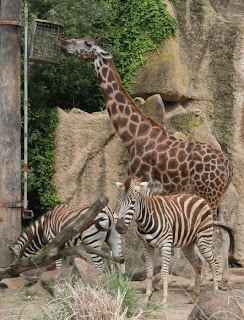 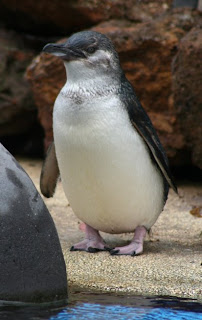 We spent this morning at the Melbourne Zoo, along with the hundreds of others out on Australia Day.
The new seal and penguin enclosure is well worth a visit.
Dokoon's new baby isn't on show as yet. The keeper said she is just getting used to having 5 people in her pen, it will take a while to cope with the hundreds wanting to see her.
Could have spent the whole time watching the orangutans - my favourite animal.
Now sitting down to a cuppa and a lamington and finishing off my last block of the Red Delicious quilt. 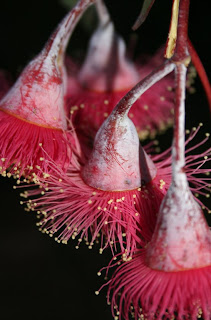 Over the past 40 years I have been very lucky to travel, both overseas and within Australia.
It is exciting, the whole process of checking in, boarding the plane and finally arriving at your destination.
After one trip to USA, we flew into Melbourne, over the city as the sun was coming up. We saw the Shrine, Government House, the Concert Hall Spire, St Kilda Rd with it's beautiful green trees lining the road and the Yarra River. It was the most beautiful sight. It was actually quite emotional.
I love travelling but I have to admit, "it's always nice to come home".
HAPPY AUSTRALIA DAY.
Posted by jacaranda at 6:07 AM No comments:

It's been a busy week. 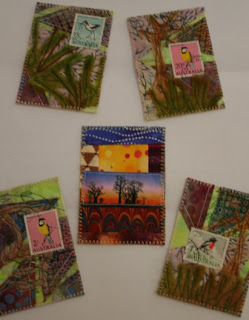 Finished 5 of 12 ATC's for swapping with my NZ group.
Found some old bird stamps in my childhood stamp album.
The middle ATC was made using the Packaging Tape Transfer method. 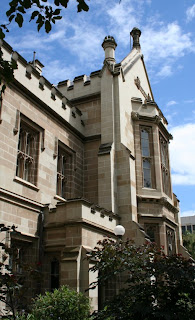 Called into the city on Tuesday and walked past Melbourne Uni. There were many new students enrolling in their courses, I hope they didn't think I was a mature age student.
The grounds have some beautiful old buildings. 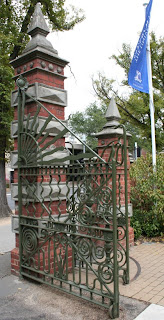 Love the old wrought iron gates at the entrance. There would have been many thousands of students passing through them over the years. These gates could probably tell a few good stories. 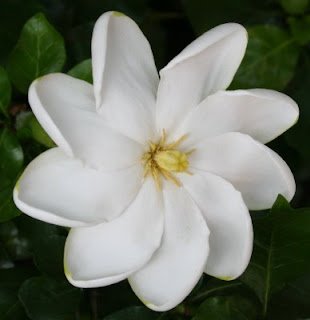 Many of the bushes were covered in these beautiful white flowers, wish I knew the name of the plant.

Posted by jacaranda at 10:02 AM No comments: 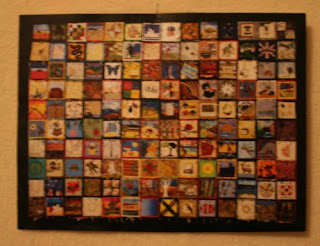 Posted by jacaranda at 9:23 PM No comments: 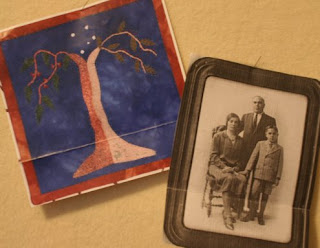 My Dad asked me the other day, what happened to the Australian Citizenship Quilt that I had made a block for. I gather it is still hanging in Parliament House in Canberra. My block was one of many chosen and I was very proud the day the letter came to inform me. We were asked to write a piece to accompany our block, explaining why we had chosen the block to make. This is what I wrote.
I am a 2nd generation Australian of Turkish (Lozengrad) and Croation (Island of Vis in the Adriatic) descent on my father's side.
My grandfather Peter (pronounced "Pet-a") left Turkey as a young man and tried the goldfields in Alaska before becoming an interpreter on the USA railway tunnel under the Great Lakes connecting Michigan to Canada. When applying for the railway job, the clerk had difficulty with his surname and pronunciation, so he Anglised it to "Thomas" and so it remained.
When the tunnel was complete, he boarded the NZ Steamship "Tahiti" for Australia. On arrival in Sydney in 1912, he found work, until 1915 when he was interned as a Turkish National with the advent of the Gallipoli campaign.
Upon release he managed a fruit shop with a friend and married his friend's sister-in-law in 1923.
Lukria, my grandmother-to-be, was brought out to Australia by her sister. Her family were Venetian ship owners in the 17th century operating from Venice to North Africa and the Holy Land.
Eventually my grandparents owned their own fruit shop, market garden and poultry farm. I recently visited their shop in Mosman, Sydney and felt a connection, as it had become a Patchwork Shop. Croatians are known for their beautiful embroidery so perhaps that is where my love for fabric art and stitching comes from.
Regretfully I never knew my grandparents, as they passed away before I was born and therefore I dedicate my square to
Peter Atanasov (1885-1949) and Lucria Zanki (1893-1937).
My square is of an olive and gum tree growing peacefully together under the Southern Cross. Olive trees are in abundance in Eastern Europe and I feel that even though they would have kept their European traditions, like our beautiful flowering gums, they would have also lived as Australians. They became Australian Citizens (Naturalised) in 1924. 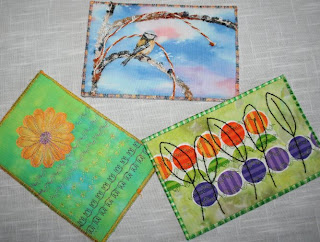 L. Lisa 7th, Middle Cathy 1st, R. Mine 8th
I participated in a Whisper Postcard Swap with 7 other quilters.
Remember those school days where we played Chinese Whispers, well this was on the same lines.
Cathy sent her P/C to the 2nd on the list and they then made one and sent it to the 3rd and so on. We had to make 3, keep one, post one to the next person and one to the previous person whom we received one from.
From Cathy's first P/C of the branches and bird, this was how it ended up at the end. Mine being the last.
Lisa sent me the daisy and I had to use a colour from that P/C or a theme but it was not to be the same.
How different they all ended up. One P/C was a hot air balloon, 2 were night time scenes and various colour combinations were used.
Looking forward to the next round.
Posted by jacaranda at 6:29 PM No comments:

I have decided to participate in the "Quilts4London" Pennant making for the 2012 Olympic Games.
http://www.quilts4london.org.uk
A pennant quilt, A3 size, is made to represent your country and will be displayed prior to the Games.
The committee is hoping to receive enough, so that every athlete participating in the games can be given one as a memento of the 2012 London Olympic Games.
Posted by jacaranda at 10:35 AM 2 comments:

Our Challenge for 2010, for one of the Scquilter groups I am in, is to fill in a UFO list.
The list will be kept by one of our members and on it we have written all the UFO's we want or should I say, "would like" to complete for 2010. As each is finished they are crossed off the list. A prize will be given for the most finished.
****************
My list (so far) is to complete:
Red Delicious by June.
Dear Hannah by December.
Every 3 months I have 4 ATC's for swap to be sent to NZ with the themes of:
Water, Earth, Fire, Wind, Metal and Wood.
Fingers crossed I might just get them done.
Posted by jacaranda at 9:09 AM 2 comments:

..unless I am sitting by a pool on a tropical island with a cocktail and a good book waiting for DH to come back from his dive.
(Won't be doing that for a while as DH is not allowed to dive for 12 months after his heart surgery).
Long gone are the days of doing dive bombs with school friends at the local pool covered in coconut oil that had been melted in the sun from a solid block in a little jar.
I can't wait or Autumn to come. 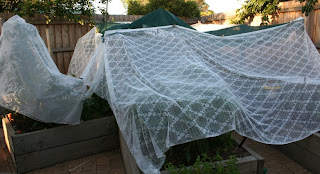 Picked up 10m of sheer curtain fabric at Spotlight for $1 a m.
It has done the trick, haven't lost one vegie plant this season yet.
Thinking of all those quilters and friend's families that are in the hot/bushfire areas.
Stay safe and take care.
Posted by jacaranda at 8:59 AM 1 comment:

The last of the blossoms. 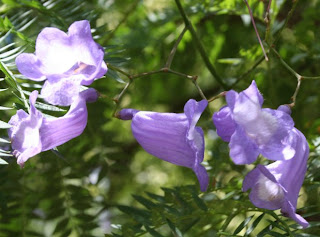 As a little girl I used to think that these blossoms were hats for the elves and the fairies wore the hats of foxgloves.

I will have to wait another year for the Jacaranda tree to flower.
Posted by jacaranda at 7:56 AM No comments: 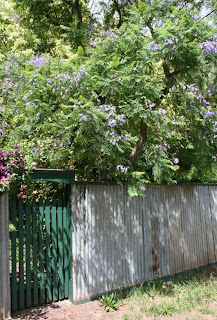 The Jacaranda is almost finished flowering 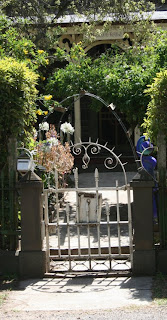 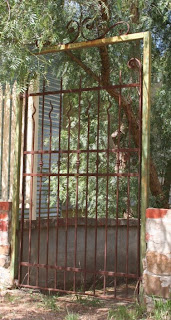 They make you wonder who entered through these old gates.

I noticed this in the Melbourne Herald Sun What's On section yesterday. Thought I might go and have a look sometime.
"Texts and Textiles"
Fascinating collection of works with intriguing patterns.
Ian Potter Museum of Art
University of Melbourne, Swanston St, Parkville
Until April 18
Free
Posted by jacaranda at 9:07 AM No comments: 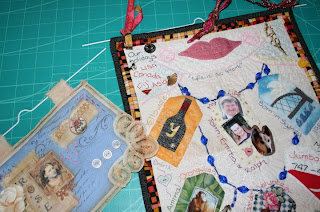 I don't throw out my calendars from the previous year until I have uncoiled the wire and taken out the hangers.They are great for hanging small pieces.
The little blue textile piece is from Carole in New Zealand, who organised a 6 inch textile swap.
The other is my self portrait from the Scquilters Bendigo Retreat.
Posted by jacaranda at 9:00 AM 1 comment: 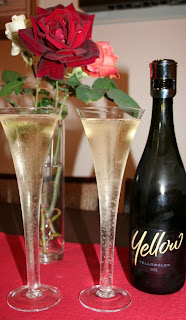 I wish you all a Happy and Healthy 2010.
Take care of yourselves, your families and those close to you.
Live every day as if it is your last and do what you love most.
Last night was a quiet one, we went to the movies, Japanese for dinner and a walk along the foreshore at Williamstown. As usual was asleep on the couch by 9.30pm.
I am not going to make any NY resolutions this year. I never keep them anyway.
Would like to get a couple of quilts made, lose a few kilos and learn to say "no".
Posted by jacaranda at 10:18 AM 1 comment: